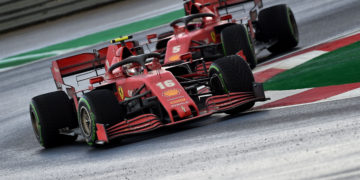 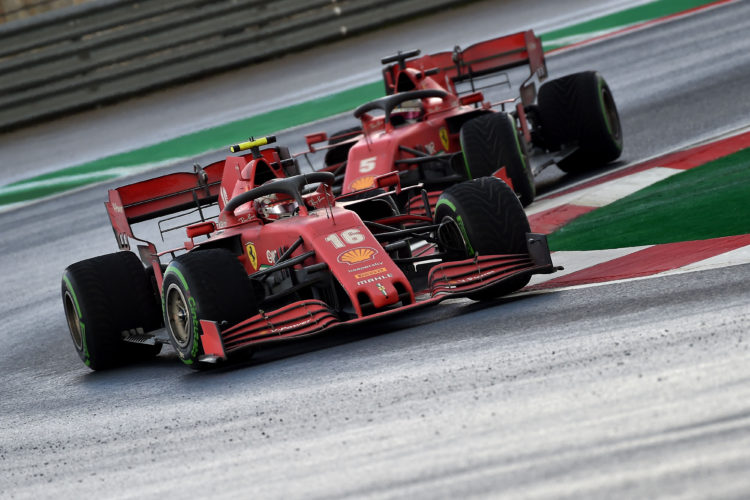 Turkish Grand Prix – Ferrari’s Charles Leclerc was typically hard on himself after a final lap error cost himself a podium place with Sebastian Vettel stealing P3.

Charles Leclerc couldn’t hide his disappointment with himself after making an error on the final lap while fighting with Sergio Perez.

Leclerc started from P12 but had a poor start from the less grippy side of the grid and finished the first lap in P14. He was the first of the drivers to pull the trigger by switching to the Intermediate tyre and utilised the grip well to climb into the top ten. Another stop on Lap 30 for another set of Intermediates meant he was able to continue rising through the order. This included catching and passing Vettel down the back straight.

Heading into the final laps, Leclerc caught up with Sergio Perez in P2, with Vettel close behind. On the last lap, Leclerc got past Perez at Turn 11 but the Racing Point driver kept the boot in and got back alongside down the back straight. Heading into the braking zone, Leclerc left it as late as possible but touched the damp off the racing line and slid off into the escape area.

Vettel was able to come through into P3, with Leclerc crossing the line an angry P4.

He got on the radio to yell about himself, saying he was as ‘disappointed as in Baku’ (Leclerc crashed in qualifying in 2019 having been fast throughout practice). He also said that he had ‘done a shit job’, but composed himself to say that he was happy for Vettel’s result after a tough year.

Calmer when talking to the media out of the car, Leclerc remained hard on himself, saying: “Unfortunately in the last corner, nothing to say, in the last three corners. In the end, the end result counts. I was good for one part of the race but shit when it matters and that’s it. Fourth. I’m so disappointed.”

“I am extremely disappointed with myself. I messed it up in the last corner and there’s not much else to say really, because in the end it’s the result that counts.”

“My start was bad, from the dirty side of the track, but then things went better and in the middle part of the race we were extremely quick and I did a good job of catching up with the leading group that had been several seconds in front, but then I threw everything in the bin at the end.” continued Leclerc.

With Ferrari the highest scorers of the day with 27 points, Leclerc congratulated Vettel by saying:

“Now that I’ve calmed down, congratulations to Seb – he deserves it. It’s not been a good year for him. Even if I’m so ****** off with myself, he’s done a great job and I hope he will enjoy it.”