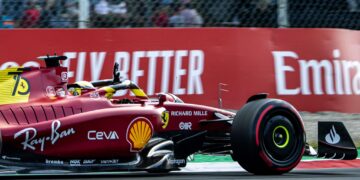 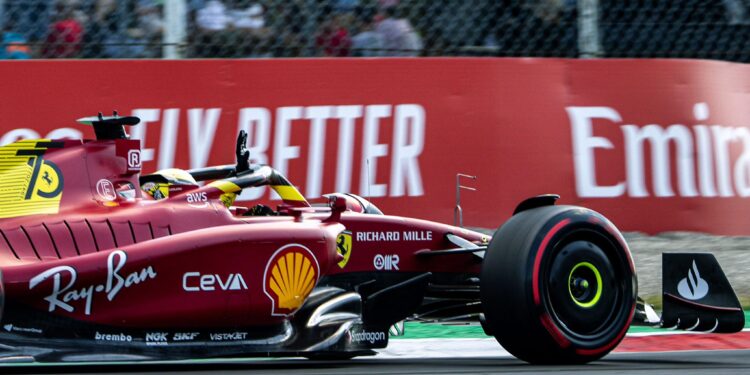 Italian Grand Prix – Charles Leclerc sealed pole for Ferrari on his final attempt to give the tifosi something to celebrate tonight.

As in Spa a few weeks ago, there are a whole host of drivers who will have grid penalties to serve on Sunday after changing parts, so the qualifying results and the final line up will look significantly different.

Aston Martin’s Lance Stroll was the first to head out into the Italian sun as the session started, the Canadian posting a 1:24.231 but that did not stay in P1 for long and with ten minutes to go the Ferraris were on top, to the delight of the Monza crowd with Charles Leclerc setting a 1:21.280 just less than a tenth quicker than Carlos Sainz.

With the effect of a tow being very big around the Temple of Speed, teams were mostly sending their cars out together so that all possible time advantages could be taken.

Heading into the final five minutes Max Verstappen had taken over at the top of the times with a 1:20.922 while Kevin Magnussen, Valtteri Bottas, Stroll, Mick Schumacher and Sebastian Vettel were in the elimination zone.

The top four – the Red Bulls and Ferraris – as well as Yuki Tsunoda in P6 all stood fast in the pits for the final few minutes while the rest of the grid fought it out. It was mixed fortunes for Williams, Nicholas Latifi locking up at the first corner which put pay to any progress for him while Nyck de Vries, the last-minute replacement for Alex Albon, also had a bit of a lock up but did make it through to Q2 on his first try.

Just after the session the Dutchman had his final time deleted due to track limits but as his second best time was two hundredths quicker than Latifi, he ended Q1 in P15. Latifi was joined in the drop out spots by the Aston Martin and Haas cars.

The Red Bulls were the first to head back out but behind them was a train of the other twelve cars, as Tsunoda remained in his garage. A 1:21.358 was the first Q2 time on the board from Sergio Perez but after the rest of the opening laps set he was beaten by his teammate and the Ferraris again.

Sainz was the faster of the two scarlet cars initially after Leclerc’s car got a bit twitchy through Ascari, leaving just over three tenths between the top two with Verstappen another five hundredths back.

With just over two minutes left on the clock ten of the cars headed back out, the top four and Tsunoda, who is one of those with grid penalties, all sat back to watch how things would end. There would be no fairytale Q3 for de Vries however as he locked up into T4 meaning that he could only end P13, with Zhou Guanyu and Tsunoda behind while Esteban Ocon and Bottas also ended their day in Q2.

It was close between Ocon and Pierre Gasly for the final spot in the top ten shootout but it was advantage to the AlphaTauri driver who took P10 but 0.068 seconds ahead of Ocon to prevent the session from ending with the top ten all in twos.

For the final part of qualifying it was Lando Norris out first but he was closely followed by the other pole contenders. The McLaren driver set a 1:22.174 as his banker lap but it was once again the Ferraris on top with Sainz setting a 1:20.584 ahead of Leclerc while the Red Bulls slotted in behind them again.

Fernando Alonso returned to the pits instead of completing his lap as he wasn’t happy with his front tyres while over at Mercedes, George Russell, in P5, wasn’t enjoying his tyres and the lack of grip he was getting with them either.

The Alpine driver was the first out for the final runs though he did drop behind Perez on the warm up lap. The Spaniard set a 1:21.8 lap but had it deleted due to track limits so he ended up timeless in P10.

Verstappen and Sainz slotted into P2 and P3, but they are amongst those who will have penalties to serve so they, and many others behind, won’t be starting that high up for the Grand Prix.

Perez took P4 ahead of the Mercedes of Lewis Hamilton and Russell while the two McLarens were P7 and P8 with Norris a few tenths quicker than Daniel Ricciardo while Gasly in P9 was the last of those with a time in Q3.