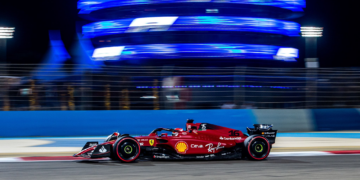 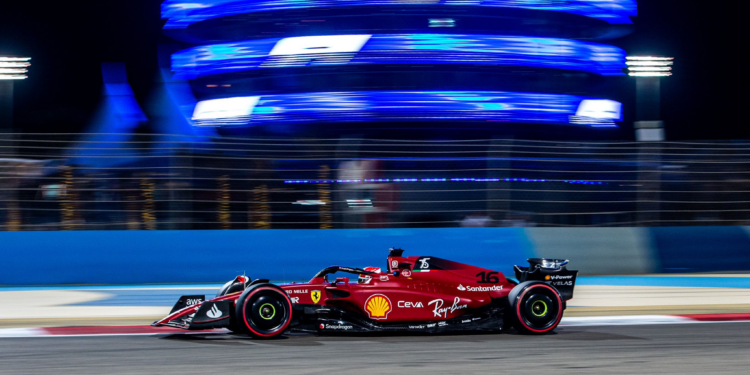 Bahrain Grand Prix – Charles Leclerc managed to hold off Max Verstappen to put Ferrari on pole for the first race of the 2022 season.

The first qualifying session of the 2022 F1 World Championship started under the lights as dusk drew in around the Bahrain International Circuit. It was the Williams and AlphaTauri drivers who headed out as the track went green and it was Pierre Gasly who put in the first timed lap with a 1:33.016.

Max Verstappen, on his first quick lap went straight to the top of the times with a 1:31.909, the fastest time seen so far this weekend though it wasn’t long before the two Ferraris went over three tenths faster with Charles Leclerc in P1 with a 1:31.471.

After an unsafe release in FP3 which saw Fernando Alonso have to come to a complete halt to avoid Carlos Sainz, the Ferrari driver avoided a penalty though as the stewards decided a reprimand was sufficient punishment for the offence.

For the final two minutes of the Q1 session there were seventeen drivers on track, with the top three of Leclerc, Sainz and Verstappen seemingly confident in their times and deciding to stay in the garage. The two Mercedes decided not to complete their final laps, as they were in P5 and P6, at that point and while they did get shuffled back, were in no danger of being eliminated.

There was a lot of movement on the timesheets at the end of the session, both Haas drivers making it through with Kevin Magnussen in P5 just over four and a half tenths behind the Ferrari, and Mick Schumacher another four tenths back in P13.

Zhou Guanyu ensured that his first F1 qualifying session would not be ending early, the Chinese driver getting through in P14. It was not a good day for Aston Martin, with both drivers being eliminated, super-sub Nico Hulkenberg ending two tenths ahead of Lance Stroll in P17, while McLaren lost one of their cars with Daniel Ricciardo ending his Saturday in between the Astons in P18.

Alex Albon, in his first race for Williams just got through to Q2 with a time a couple of hundredths ahead of Yuki Tsunoda.

While Magnussen was the first to set a time in the second part of qualifying, he was quickly deposed by Verstappen who once again started the session with the fastest lap seen so far, the Dutchman posting a 1:30.757. Things got harder for the Haas driver from there though as he had to head back to the pits with a hydraulic issue, at that point he was P4.

Once again Verstappen was confident with his time and remained in the garage after setting that initial lap, it was the right move as Sainz could only get within 0.030 of him. Haas will have some quick work to do on Magnussen’s car as the Dane was only knocked back a few spots and will progress to Q3.

Q2 saw the other McLaren fail to progress as Lando Norris could only manage P13, just behind the Haas of Schumacher, who got out of shape on his final lap.

The final part of qualifying, the top ten shootout, saw the Ferraris on top after the first runs with Sainz just ahead of his teammate with a 1:30.687. Verstappen could only manage P3 at that point, putting in a time just a hundredth faster than his Q2 time. The Dutchman complaining that a slower outlap doesn’t help his tyres and asking Red Bull to just let him run the outlap as he wants.

Haas did manage to get Magnussen out for the end of the session as he, Alonso and Bottas all headed out to track around the same time.

Leclerc did manage to take the provisional pole from his teammate but Verstappen was still on a lap but while the reigning world champion did improve, he couldn’t compete with the Ferrari driver and had to settle for P2.

Sainz will be in P3, Verstappen going 0.006 seconds faster than the Spaniard to prevent Ferrari from taking a front row lockout. Perez ended the day in P4 while Hamilton could only manage P5 for Mercedes.

Tomorrow will see Bottas start the Grand Prix just one place behind his old teammate as he took P6 in his first race for Alfa Romeo. It was great work from Haas to get Magnussen’s car out for the end of the session although they were onto the Dane after the chequered flag to get him to stop on track but it was a great day for the team and they will start from P7 tomorrow.

Alonso took P8 for Alpine, 1.6 seconds off Leclerc’s time, while it wasn’t a day to remember for George Russell who  didn’t have a great final lap and will have to settle for P9, ahead of Gasly’s AlphaTauri.