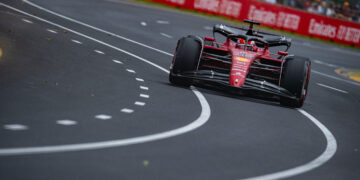 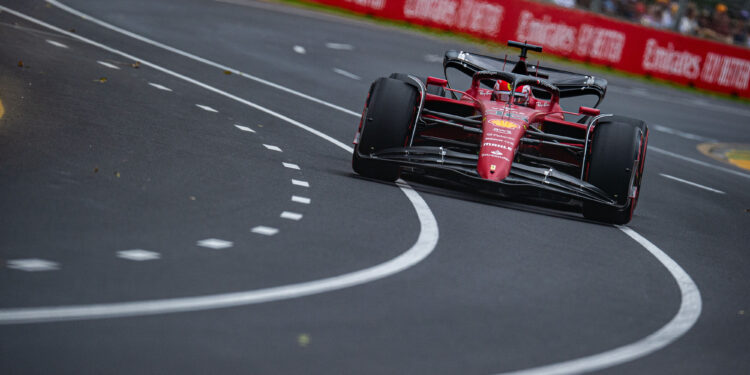 The pit lane was busy at the green light after the disrupted final practice session, with half the field venturing on to the track.

The Ferrari’s were one of the first to set a lap time, Leclerc setting the benchmark of 1:19.391. Lando Norris’s McLaren slotted into an early second place before moving down the order as the top runners started their runs. Leclerc was then displaced by teammate Carlos Sainz.

Sergio Perez was initially the lead Red Bull, moving to P3. Teammate Verstappen was next up, moving up to P2, 0.44s behind Leclerc.

Mercedes struggled once again, Hamilton experiencing a snap of oversteer towards the end of the lap on his way to P11, while teammate Russell P9.

Lewis Hamilton only has enough pace for 11th! 👀

A snap of oversteer cost the 7-time World Champion ⏱

The Ferrari one two at the top of the times then became a Red Bull, with Verstappen and Perez dropping the Ferrari’s to third and fourth.  The top six then opted to stay in the pits with only a few minutes to go, the battle to move out of Q1 underway lower down the order.

Aston Martin’s heroic effort to get Lance Stroll out  looked to have paid off, with the Canadian heading out on to track in the closing minutes.

Stroll was then involved in a massive crash involving the Williams of Nicholas Latifi, bringing out the red flag with just two minutes remaining on the clock. Ironically, it gave an opportunity for the second Aston Martin of Sebastian Vettel to be readied for lap time.  The FIA stated they would investigate after the qualifying.

Nicolas Latifi and Lance Stroll have a BIG collision! 💥

That costly misunderstanding causes a stoppage to Q1 🚩

After short delay, there was frantic effort to register a fast lap, with a race to be at the front of the queue in the pit lane. Most cars opted to sit at the pit exit for a full three minutes to ensure a lap time.  The race to get to the start finish line saw Magnussen, Ricciardo and Albon jostling to the get the front of the queue.

The times at the bottom of the table constantly changed, however the Mercedes duo were not able to get a time in, having missed the end of the session.

Haas’s did not ave the pace from the opening two races in Australia, both cars down the order.   Mick Schumacher  however moved up to 15th, sending the young German into Q2.

The bottom four were Albon, Magnussen, and Vettel, with Latfi and Stroll out after their earlier crash. Albon’s Williams then stopped on circuit delaying the start of Q2.

As Q2 got underway it was the Red Bulls of Verstappen and Perez that set the benchmark time with a time of1:18.611 from teammate Verstappen.  The two Ferrari’s moved to P3 and P4 respectively, the Italian team  opting for used tyres for their first runs.

The McLaren’s continued their strong form moving to P5 and P6. Alonso’s Alpine set the timing sectors alight, with a strong first lap moving him up to P2.

Mercedes faced an uphill struggle in Q2, George Russell taking to the grass on his first flying lap, while Hamilton’s effort was only good enough for P8. Russell’s second attempt moved him to P6.

Sergio Perez’s s lap time would be investigated after qualifying for failing to slow under yellow flags, but the Mexican continued to push. His next lap of 1:18.340, was 0.271s faster than Verstappen, looking the more comfortable of the Red Bulls.

Max Verstappen currently has the fastest time, with Fernando Alonso just behind 👀

The Ferrari’s of Leclerc and Sainz then took to the track on new soft tyres, the Spaniard opting to do an additional warm up lap.  Sainz’s effort suffered from porpoising, moving to P3, 0.399s slower than Perez. Leclerc moved to P2, 0.266s away from the Red Bull.

With two minutes to go, the race to move out of Q2 saw more cars opting for additional warm up runs.  Esteban Ocon aimed to join his teammate in the top ten, his time saw him move to P8, with Gasly staying in P11. Ricciardo moved to P8, moving Hamilton into the drop zone, before Hamilton took P8 away from Ricciardo, the home hero still safely into Q3.

Gasly Bottas, Tsunoda, Zhou and Schumacher were the drivers eliminated.  The Alfa Romeo’s were both knocked out, ending Bottas’s run of Q3 appearances from 2017.

Both Ferrari’s again opted for used tyres on their first runs, with Sainz’s time moving him to P8, while Leclerc opted for a warm up lap.

Lando Norris moved to P5, with Ricciardo moving to third, with the Alpine of Ocon splitting the two McLaren’s.

Alonso was on a quick lap before hitting the barrier, bringing out the red flag atfer the Alpine driver lost hydraulics.  Leclerc crossed the line to go fastest with a time of 1:18.239, to take provisional pole away from Sergio Perez. Sainz and Russell’s effort to move from P8 and P9 was undone as the red flag was waved just as they crossed the line.

Fernando Alonso goes flying into the barriers after setting a purple middle sector! 🟪

Talk about the commentator's curse! 👀

After a delay to clean the track and repair the barriers, the session got underway with seven minutes remaining.  At the green light both Mercedes cars were first out in formation, both opting for a second warm up lap.  Their next attempts saw Hamilton move to P6, Russell to P4.

Leclerc left it late for his lap, taking provisional pole by 0.286s, with a time of 1:17.868 from Verstappen. Carlos Sainz had an unlucky end to qualifying after being caught out by the red flag. The Spaniard complained of a starter issue in the garage, delaying his final run by three minutes. On his final lap, he went wide in the final sector, losing the lap and remaining P9.

It doesn't get ANY closer than that! ⏱

Sergio Perez is 0.001 away from Charles Leclerc on pole 🤯

Lando Norris showed McLaren’s continuing improving form, qualifying in P4. The two Mercedes were next in P5 and P6, with Hamilton leading Russell. The second McLaren of Ricciardo was P7, Ocon’s sole remaining Alpine was P8. Carlos Sainz’s Ferrari was P9, and Alonso rounded off the top 10, after crashing out

While Perez lines up P3, the Mexican is under investigation for failing to slow under yellow flags after George Russell took to the grass early in Q3.