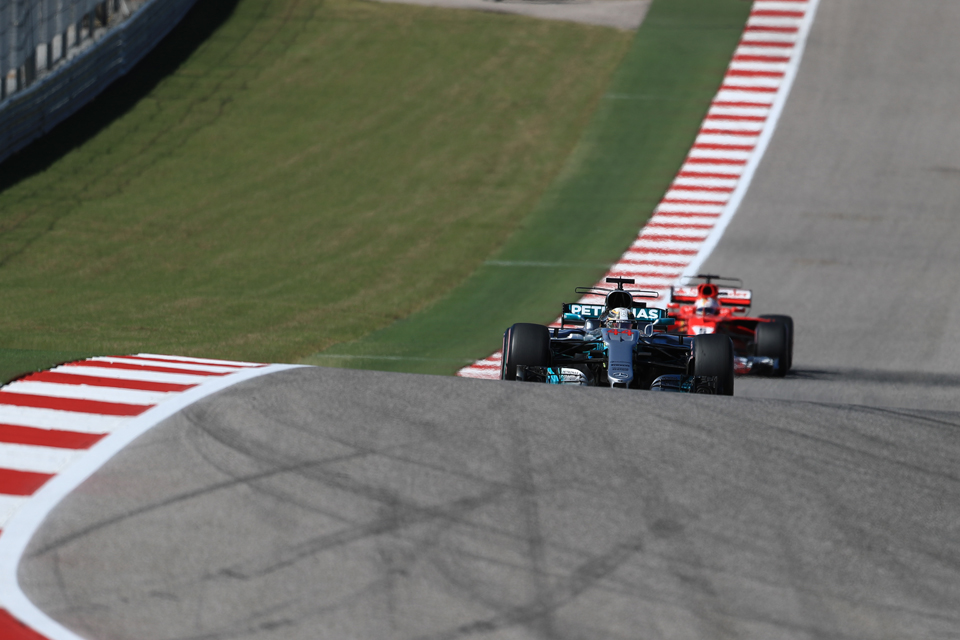 Lewis Hamilton cements championship position with victory in the US

Lewis Hamilton cements championship position with victory in the US

United States Grand Prix – Mercedes’ Lewis Hamilton has further extended his championship lead in America, having taken a convincing victory at the Circuit of the Americas. Sebastian Vettel finished P2 ahead of Ferrari’s Kimi Raikkonen.

Hamilton claimed the win in Austin, having had to recover from dropping a place at the start to Ferrari’s Sebastian Vettel. The German driver, starting P2, outflanked Hamilton into Turn 1 after hooking up his getaway perfectly. However, the championship leader was clearly the quicker man and set about getting back past his championship rival.

Utilising DRS, Hamilton attacked Vettel down the back straight and eased past in the braking zone to take the lead of the race and began pulling away with apparent ease. Behind the leading two, Valtteri Bottas had to fend off the attentions of Daniel Ricciardo, who desperately tried to get past the Mercedes in the early stages with some late lunges – lunges which were ultimately futile. Circulating behind the Merc appeared to put undue stress on his car, as his engine failed on Lap 16.

Further down the pack, Red Bull’s Max Verstappen quickly set about recovering from his lowly grid position to climb back into the top ten within the opening laps. His alternative strategy, starting on the SuperSofts while the leaders were on UltraSofts, allowed him to stay out longer as the leaders began to pit. This brought him into play in the second half of the race, particularly as Red Bull rolled the dice with him to apply pressure to the frontrunners. With Hamilttn enjoying a comfortable lead over Vettel, who was just two seconds ahead of Bottas, who himself was just a second clear of Raikkonen, Red Bull pitted Verstappen as he closed on the back of the train. Vettel opted to pit the following lap to cover the Dutch driver, while the two Finns continued.

With twenty laps to go, Hamilton led Bottas by 10 seconds, with Raikkonen attacking his compatriot hard for P2. Eventually, the Ferrari got past, leaving Bottas vulnerable to the advances of the much faster Vettel & Verstappen. Bottas was clearly struggling, and was passed by both with ease, forcing the Finn to pit again with just three laps to go. The two Ferraris were now P2 & P3 but, unsurprisingly, Raikkonen allowed Vettel through to move up to P2. With Verstappen just behind and on much fresher tyres, this meant the Ferrari driver now had to fight extremely hard to keep the Red Bull behind. It was a frantic scramble to the line, and Verstappen looked to have snuck past Raikkonen with just two corners to go and crossed the line in P3. However, the Dutch driver was given a five second time penalty for passing Raikkonen off the track and the final podium place went to Raikkonen.

Bottas finished a lonely P5 after his late tyre troubles, with Esteban Ocon taking a sterling P6 in the lead Force India. Carlos Sainz, making his Renault debut, put in an astonishing drive with some top-drawer overtakes en route to take P7 on a day that saw his teammate Nico Hulkenberg retire early on with technical problems. Sergio Perez was P8 in the second Force India, with Felipe Massa finishing P9 in his Williams. The final point went to Toro Rosso’s Daniil Kvyat, making his return to F1 after sitting out two rounds in favour of Pierre Gasly.