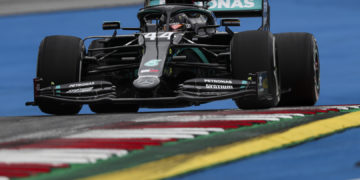 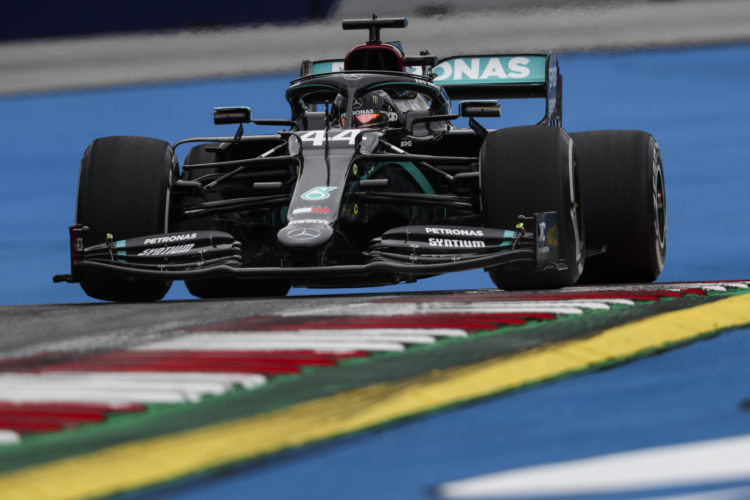 Lewis Hamilton has rounded off a day of domination for Mercedes by going quickest in second practice at the Red Bull Ring. The reigning Champion did the fastest time of the day by clocking 1:04.304 on the Soft tyres during his qualifying simulation run during the session. This time was 0.197 seconds clear of teammate Valtteri Bottas, who also finished P2 in the morning session.

Closest rival to the dominant Mercedes squad was the Racing Point of Sergio Perez. The Mexican driver did a 1:04.945 on the Soft compound, to slot in 0.641 behind Hamilton’s best practice time. This was just enough to keep the Racing Point ahead of Sebastian Vettel. The Ferrari driver was a further 0.016 behind Perez, also on the Soft tyre.

Daniel Ricciardo had a late start to the session as his car was worked on in the garage for the first half hour but ended up P5 on the timesheets with a strong 1:04.972. Lando Norris was P6 in the lead McLaren, just over a tenth behind Ricciardo.

Lance Stroll was P7 in the second Racing Point but arguably could have been higher, if it hadn’t been for a slight error on his Soft tyre flying lap. Max Verstappen was P8 in a subdued session from Red Bull, as last year’s winner slid off the road at Turn 5 on his Soft tyres. He finished just under a second from the front. Charles Leclerc was P9 in the second Ferrari, while Carlos Sainz rounded out the top ten for McLaren.

Esteban Ocon was P11 for Renault, while Daniil Kvyat was P12 for Alpha Tauri. The Russian had an early spin in practice at Turn 1 that almost sent him into the barriers, while Alex Albon also had a spin at the same corner when the rear stepped out on him. He finished P13 in the second Red Bull. Antonio Giovinazzi was P14 for Alfa Romeo, while Kevin Magnussen was P15 for Haas. Romain Grosjean got back on track after missing almost the entire FP1 session due to a brake fluid leak, and finished P16.

Pierre Gasly was P17 for Alpha Tauri, while George Russell was P18 for Williams. Kimi Raikkonen finished P19, as the Alfa driver didn’t manage to get a flying lap in on the Soft tyre, and rookie Nicholas Latifi rounded out the field in P20.