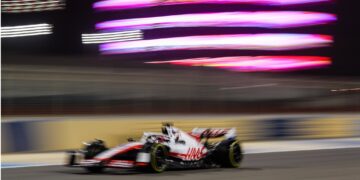 Magnussen makes the most of Haas’ added time to go fastest

Magnussen makes the most of Haas’ added time to go fastest 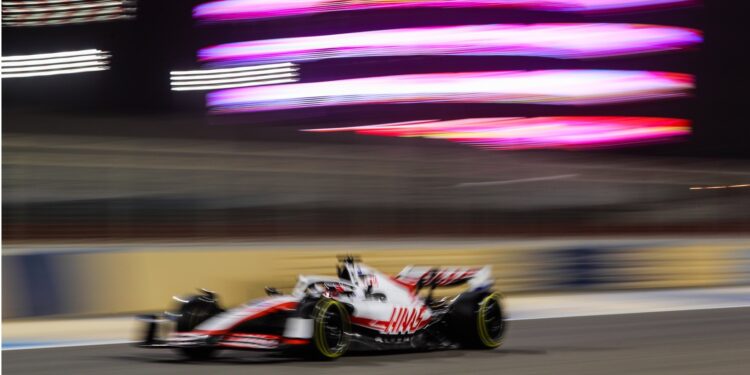 Pre-season testing 2 – For his first day back in Formula 1 Kevin Magnussen made Haas’ extra hour on track count by posting the fastest lap of the day.

With the other nine teams finished for the day, the Haas F1 Team enjoyed their exclusive access to the Bahrain international Circuit for the first of the four additional hours they will be having over the next two days.

It hasn’t been the smoothest of starts to a season for Haas, the team impressed the rest of the paddock on the first day in Barcelona when they revealed the 2022 car that they had sacrificed development of their 2021 challenger in favour of. However, while there were some on-track issues at the first test, their off-track issues would be the bigger topics of conversation for the following few weeks.

For the final day in Barcelona Haas ran an all white livery and removed any mention of Uralkali they could. Last weekend they made the announcement that everyone was expecting, that the Uralkali contract would be terminated and the company’s driver, Nikita Mazepin, would also not be continuing with the team.

The days that followed brought much speculation over who would fill the final seat on the 2022 grid but in the end it was a name no one had expected, the day before Bahrain testing saw Haas reveal that their 2017-2020 driver, Kevin Magnussen, would leave his new sportscar career to rejoin the F1 circus.

While all this had been happening however the Haas freight had been delayed after the plane was grounded due to technical issues and arrived 48 hours later than planned. The team worked their best to recoup what time they could, with Guenther Steiner, the Team Principal, revealing that some team members had worked 30 hours straight, but they were still only able to get things ready for the afternoon session on day 1.

To make things fair Haas had requested to do some running on Sunday but were instead given their four hours of make up time on the second two days instead. One added hour at the end of Friday, one before the others start on Saturday, and two at the end of the day on Saturday.

Friday afternoon saw Magnussen take to the track and the VF-22 for the first time and during the official running the Dane managed 39 laps and a best time of 1:36.505. However, one he had the track to himself for that added hour the Haas car came into its own with Magnussen adding 21 more laps, almost as many as Mick Schumacher managed in the whole of the morning session before an exhaust issue stopped him.

As well as that, in his first day back in an F1 car since 2020, Magnussen set the fastest lap of testing so far with a 1:33.207, going 0.325 seconds faster than Carlos Sainz’ best during the official afternoon running. Magnussen is scheduled to be out in the morning for Haas’ five hour session though while the Dane himself might love being back in an F1 car, his neck muscles don’t seem to be as enthused.

“I could feel my neck at the end of it though – it kind of broke – but that’s expected. I’ll do another day tomorrow, break it even more, and then hopefully get in a little better shape for next week.”