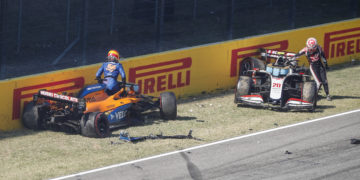 Magnussen: Restart line should be earlier on the straight

Magnussen: Restart line should be earlier on the straight 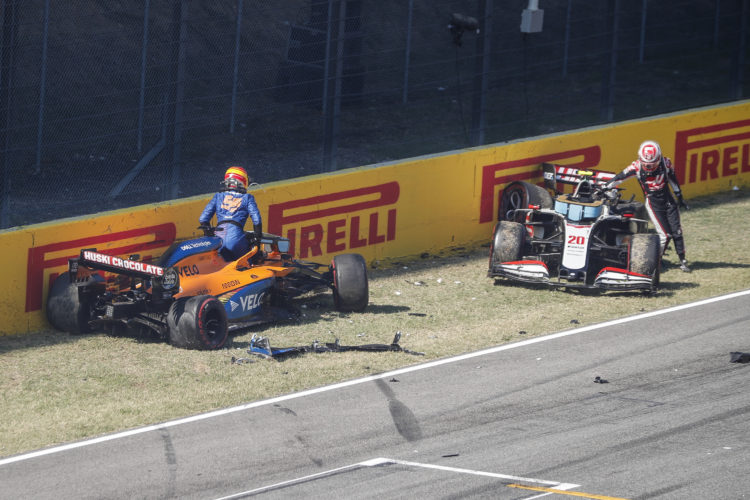 Tuscan Grand Prix – Haas’ Kevin Magnussen has explained his involvement in the multi-car crash that took out several cars.

Kevin Magnussen was one of the drivers taken out in the multi-car pile-up on the restart of the Tuscan Grand Prix. The Haas driver, along with Williams’ Nicholas Latifi, Alfa’s Antonio Giovinazzi and McLaren’s Carlos Sainz were all knocked out when someone in the midfield appeared to try guessing the moment of the restart.

Magnussen will face the stewards to explain his part of the clash, along with Latifi and Alpha Tauri’s Daniil Kvyat, and the Dane explained it from his perspective: “What seemed to happen at the restart was that the leader was going slow all the way to the line, which he’s entitled to do, but then somewhere in the middle – between me and the front, somebody decided to go. I guess somebody maybe tried to open a gap to get some momentum, but they went too early and tried to stop again.”

“The guy in front of me started to go, we were flat out for a few seconds, then suddenly they all braked. I braked, I saw people coming past, then I was hit by Giovinazzi – who had nowhere to go.”

The issue was exacerbated by the restart line being very far down the start/finish straight. This meant that leader Valtteri Bottas left it until the last minute to accelerate back up to speed.

While Bottas didn’t break any rules in dictating a slow pace until the restart line, Magnussen says the line being so far down the straight didn’t help the situation: “This is certainly something to take a look at – in terms of whether or not this thing about overtaking until the line is a good idea or not. Maybe it’s a good idea to have it somewhere earlier on the straight. We can’t have this happen again. I’d got up to P12 from P20 on the first lap, it had been looking good. This is definitely another missed opportunity.”