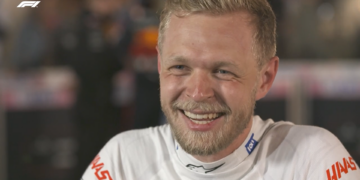 Bahrain Grand Prix – Ten days after being announced by Haas, Kevin Magnussen has given the team their best qualifying since 2019.

Despite only having had a couple of days testing the new car last week, the Danish driver seems to have gotten to grips with the 2022 version of Formula 1 pretty quickly. Two weeks ago Magnussen’s year was set up to see him running in the top categories of both the IMSA SportsCar Championship and the World Endurance Championship, but a call from Haas’ Team Principal, Guenther Steiner, changed all of that.

“It’s crazy,” Magnussen said. “I mean, this is all we could have ever hoped for. I don’t know. I’m speechless. It’s crazy.

“The last couple of weeks have just been insane and getting here, learning about the car, seeing that it, maybe, it’s a pretty good one, but still not really knowing, being so anxious about this qualifying to really see how good it is, and then just finding out that it’s really good – crazy.”

Over the course of the three practice sessions this weekend the Dane steadily cut down his gap to the leaders and despite a hydraulic issue ending his Q2 after early and also leaving him with only one run in Q3, Magnussen surpassed anyone’s expectations for both himself and Haas to qualify P7.

“I got through to Q3 on one set of tyres in Q2, I only ran one set, and I don’t know, I think it was P4 or P5 or something after the first round, and then I ended up getting through in P7.

“Then we had some issues that they needed more time to fix it and I only got that one run again in Q3 – and then still got P7. So it’s just so, so cool.”

Magnussen is not heading into the Grand Prix with anything other than enthusiasm, when asked about the Haas potential for the race he replied: “I don’t know. I’m just looking forward to it. I can’t wait to get started.”

Not only was it a good day for Magnussen, but Mick Schumacher also scored his best qualifying result, with a P12, the young German slightly disappointed though as he felt Q3 was also possible for him if not for a mistake on his final run.

“Q3 was definitely possible today,” Schumacher said. “and I’m gutted that I didn’t get there. The good thing is that we know we have the potential and it’s just a matter of putting it together over the next 23 races. Points is realistic, we have a car to do that, it’s just a matter of putting everything together. We have a lot of races coming our way so I’m sure we’ll be in a position to do that.”