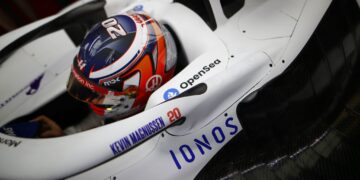 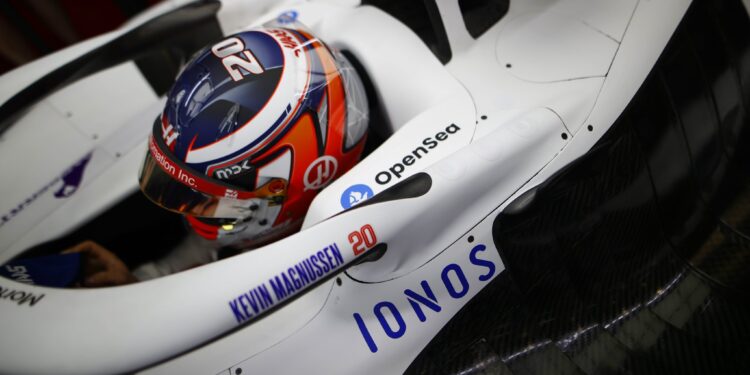 After rain during the break between sessions, it was a damp, drying track which greeted the drivers as they headed out for the first part of qualifying. The Haas drivers of Kevin Magnussen and Mick Schumacher who were the first out but they were followed out by quite a few other cars, all on intermediate tyres.

With little to no spray being thrown up by the cars around the track, Carlos Sainz reported back the same but more rain was expected, though when exactly it was going to appear varied depending on which team you asked.

The first time on the board was a 1:19.881 from Magnussen but he was soon deposed by Charles Leclerc and then Max Verstappen took over control at the top with a 1:18.495, two tenths quicker than the Ferrari driver. Just before the clock counted down to 10 minutes left in the session Fernando Alonso took over at the top of the times, 0.083 seconds quicker than the Dutch double world champion.

A minute later, as Verstappen was retaking the P1 spot, Pierre Gasly made the switch to dry tyres as AlphaTauri slotted the red-ringed softs onto the French driver’s car. After a slippy and slidey first lap, Gasly then put in fastest sectors to go top with a 1:17.626, a time which he improved to a 1:16.557.

With the other teams watching Gasly’s progress, the intermediates were all swapped out but it was not an ideal situation for Leclerc and Sainz as Ferrari double stacked them and then seemed to change their minds on tyres so the two drivers ended up stationary for much longer than they would’ve wanted.

With the track constantly improving and the drivers becoming more sure on their slicks, the leaderboard was constantly changing and despite Nicholas Latifi being P1 with less than two minutes on the clock, the Williams racer’s day ended with Q1 as he was pushed down to P16.

It ended with Lando Norris in P1 with a 1:13.106, ahead of Lewis Hamilton and Alonso. Latifi meanwhile was joined in the elimination zone by the two Alfa Romeos, Valtteri Bottas taking responsibility for that as he had decided to stay on intermediates longer than the rest, while Yuki Tsunoda and Schumacher will also not continue.

Vettel, who ended Q1 in P4, was out first for the second part of the session and his 1:16.690 was the first time on the board. With ten minutes on the clock it was one again Norris on top, the McLaren racer with a 1:11.571 while reports of rain on visors were coming in although the teams weren’t seeing anything on the radars.

As the rain seemed to start again, Mercedes were looking in a less than ideal position with Geroge Russell in P13 with Hamilton P15, but while the skies had darkened dramatically and cameras were getting spots of rain on them, the two were able to find enough grip to see them into P3 and P4.

Vettel, Magnussen, Sainz, Ricciardo and Stroll were in the danger zone with two minutes to go but while the Haas and Ferrari racers was able to emulate the Mercedes drivers and save himself, the others couldn’t find more time and they, along with Alex Albon and Gasly, wouldn’t be headed to the top ten shootout.

It ended with Verstappen’s 1:10.881 as P1 while the Ferraris got close to challenging that time, Sainz 0.009 seconds off with Leclerc a further six hundredths back.

With more rain expected imminently, all cars were queued up at the end of the pit lane waiting for the green light, Magnussen was at the head of the pack while Leclerc was the only one to have put intermediates on for the start of the session.

Magnussen’s opening lap was a 1:11.674 while Leclerc was called in to swap to slicks just after he passed the pit entry at the end of the out lap. The Monegasque was the slowest of all and while he did then pit, the session was red flagged as Leclerc returned to the track. The cause of that was Russell, the Brit got a wheel on the wet painted line at the edge of the circuit which sent him through the gravel at T4 and as he made it to the escape road, he gave it too much power which put the car into a spin and that put the rear of his car back into the gravel, beached.

The rain started as the session was red flagged and at that point Magnussen was on provisional pole ahead of Verstappen and Russell. When the session got back underway, Perez was the only one to head out, and the Red Bull racer only did an outlap on the intermediates before heading back to the pits with six minutes still to go.

The Haas team were all suppressing smiles and biting nails as they watched the weather and counted the time down, while most of the other drivers were out of their cars and ending their session. Hamilton then headed out on intermediates while Magnussen, still in his car, was celebrating and looking absolutely delighted with life.

Norris took P4 ahead of Sainz while the two Alpines were P6 and P7 with Esteban Ocon ahead of Alonso. It was P8 for Hamilton, Perez was P9 while Leclerc was P10 after being unable to set a lap after being sent out on inters at the start.

Those reactions are exactly why we LOVE F1! ❤️

Kevin Magnussen will be on POLE for tomorrow's Sprint! pic.twitter.com/xGYZkXAYAu