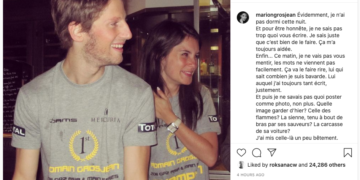 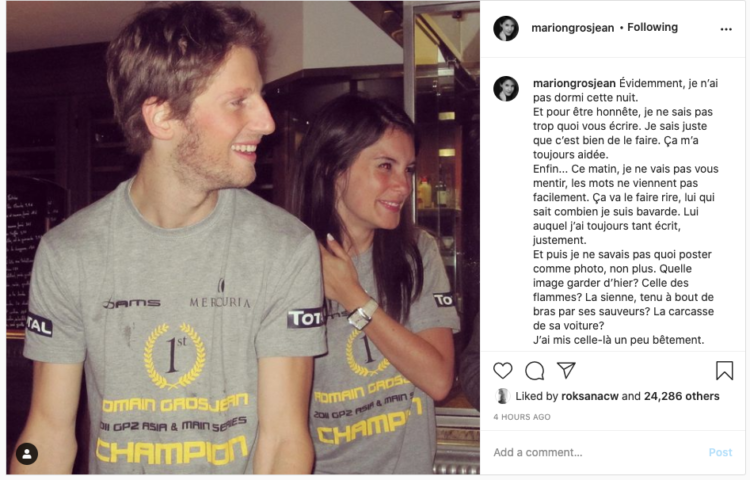 Romain Grosjean’s wife Marion Grosjean has shared an emotional post on Instagram, thanking all those involved in the rescue of her husband from his crash in Bahrain.

Romain Grosjean spent Sunday night in hospital with minor burns, following a terrifying crash on the opening lap of the Bahrain Grand Prix. He was fortunate to escape without serious injury, and admitted that without the Halo safety device fitted to all F1 cars since the start of 2018, he would have died.

Grosjean had been against the introduction of the Halo device when it was first mooted for introduction back in 2017, but admitted that he was simply wrong in his opinion.

Grosjean is married to French TV presenter Marion Jolles Grosjean, and the couple have three children. Marion took to Instagram to share her thoughts after a traumatic day.

“Obviously, I didn’t sleep last night. And to be honest, I’m not sure what to write to you. I just know it’s right to do it. It’s always helped me. Anyway, um… This morning, I’m not going to lie to you, words don’t come easily.”

“It will make him laugh, he knows how talkative I am. He to whom I’ve always written so much, precisely. And then I didn’t know what to post as a photo, either. What image to keep of yesterday? That of the flames? His, held at arm’s length by his saviors? The carcass of his car?”

Choosing a picture of them together wearing the T-shirt from Romain’s GP2 title win in 2011, Marion said: “I put that one up a bit stupidly. Because we’re both wearing the same shirt from his GP2 title. The one I still sleep in sometimes. I would have preferred the word “superhero” on it rather than “champion”, but if we have to, we’ll have it custom-made. For the kids, because that’s how we explained the unexplainable.”

“On Twitter, late, I mentioned the useful words, the urgent words, to protect them, above all. I evoked the “love shield” that had protected him. Today we will have to find other formulas, invent other sensible phrases to express feelings. We will find them together.”

Expressing her gratitude to the efforts of the FIA’s never-ending pursuit of increasing safety and the Medical Car staff, Marion also remembered the family of Jules Bianchi. The French driver died in 2015, having never regained consciousness after a crash at the 2014 Japanese Grand Prix. His death was one of the catalysts behind the introduction of the Halo. “Formulas of gratitude, for the men of the medical car. Formulas of friendship, for Jean Todt and his unfailing humanity. Formulas of thanks for all of you, who have shown your support, your affection, your kindness which are so precious to us. Thanks to the family of Jules Bianchi; to his father Philippe, whom I never stop thinking about. To Jules himself. To Kevin Magnussen for his words. To the Canal + teams for their delicacy. I’m going to forget some, forgive me. Thank you to our children who pushed him out of the inferno. Thanks to his courage, his determination, his strength, his love, his physical training that probably kept him alive too (Kim, Dan, love you guys). It didn’t take one miracle but several yesterday. Love you guys.”