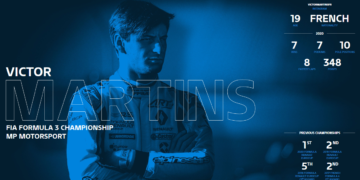 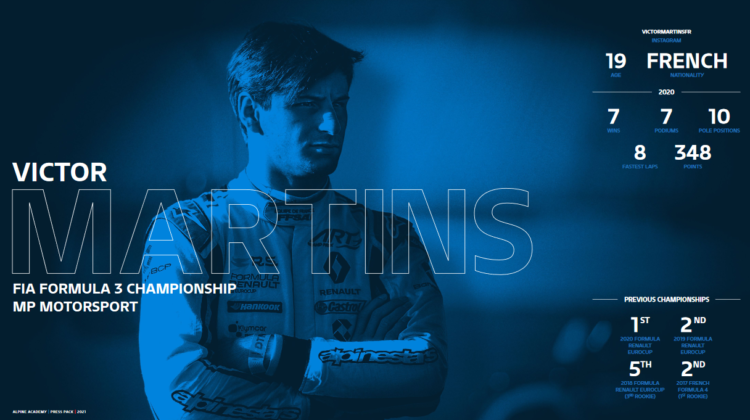 Alpine have confirmed the five drivers who will make up their Driver Academy for 2021. At Formula 2 level, Guanyu Zhou and Christian Lundgaard have been kept on. Zhou will race with UNI-Virtuosi again, while Lundgaard will stay on with ART Grand Prix. Oscar Piastri steps up from Formula 3, where he won the title in 2020, to race in F2 with Prema this year.

At Formula 3 level, Caio Collet and Victor Martins have been signed to race with MP Motorsport. Martins was part of the Renault Academy from 2018 to 2019, but was dropped at the conclusion of 2019. However, Martins has been re-signed after winning the Formula Renault Eurocup last season.

“It feels amazing because when I left the Academy for 2020 it wasn’t easy.” said Martins after the announcement. “It meant I wasn’t able to have all the advice from everyone in the Academy and without access to the simulator, physical training help, preparation advice and I wasn’t wearing the Renault colours when I was driving. It was difficult to accept, but I’m pleased with how I moved on and how I worked hard to be back with the Academy in 2021. I knew if I did a good job in 2020, I could come back and have the valuable things and access again.”

“I had to accept during the previous years that you need to keep going and keep doing the job. From what I learnt with the Academy in 2018 and 2019, I knew I had to deliver good results and keep that going right to the end of the season. I managed to progress and make that final step and won the title.” concluded Martins.

“In Formula 2, we have Zhou competing his third year in the series, Christian embarking on his second year and Oscar entering as a rookie.” said Alpine Driver Academy Director Mia Sharizman. “The level and the competition between our three drivers will be very high and we hope that they will push each other and raise the bar.”

With Guanyu Zhou & Christian Lundgaard both staying at the forefront of Formula 2 for another season, Sharizman says the goal is clear for both.

“Zhou and Christian are staying with their respective teams from last season and Oscar remains with PREMA.” said Sharizman. “This will give all three of them stability to focus and maximise their package between team and driver. The target is clear: to win the championship. The objective comes with pressure, but we believe Zhou and Christian are experienced enough to handle those demands having already competed in Formula 2, while Oscar has the experience of being in a title fight having won last year’s Formula 3 championship in the closing laps of the final race.”