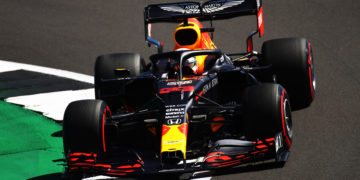 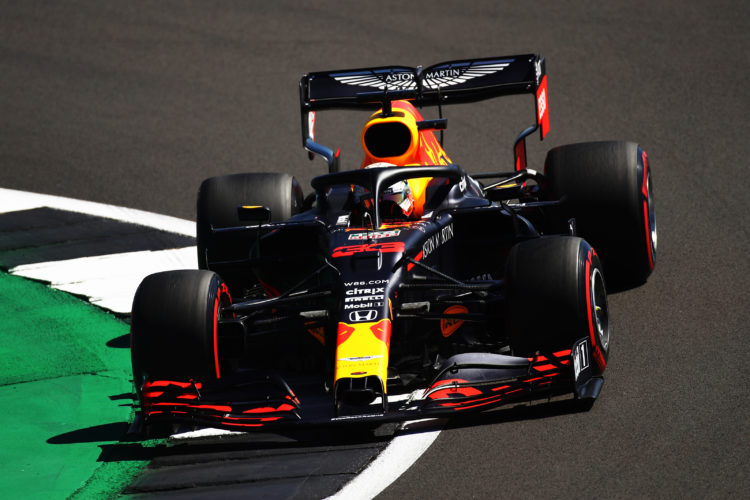 70th Anniversary Grand Prix – Max Verstappen has snatched victory away from Mercedes at Silverstone, thanks to an inspired tyre strategy.

Click here for the complete results from the 2020 70th Anniversary Grand Prix.

Max Verstappen has won the 70th Anniversary Grand Prix at Silverstone. The Red Bull driver started the race from P4 but immediately made progress to jump Nico Hulkenberg for P3 into Turn 1. Having started on the Hard tyre, Verstappen closely shadowed the Mercs as both Valtteri Bottas and Lewis Hamilton started to struggle on the Medium tyre.

It became apparent that Verstappen was quicker, and he inherited the lead after the two Mercedes drivers pitted. Crucially, after an initial burst of speed after their stops, both Mercs pace ebbed away quite quickly and Verstappen started to edge away again as he approached his pitstop window.

Verstappen pitted for Mediums at the halfway point, running a very short second stint of just 6 laps before pitting again for the Hard compound. Valtteri Bottas also pitted on Lap 32, staying behind Verstappen on track. Lewis Hamilton didn’t pit and extended his stint by a further ten laps, with Merc being able to tell that the tyres weren’t in danger of failing after analysing Bottas’.

Hamilton pitted with ten laps to go, coming out in P4 but quickly catching and passing Charles Leclerc’s Ferrari to get back into the podium places. He then set off after Bottas, with both Merc drivers told they were free to race. It wasn’t much of a fight, with Bottas powerless to stop Hamilton from passing using DRS down the Wellington Straight.

Verstappen claimed the victory by almost ten seconds over Hamilton, with Bottas a disgruntled P3. Leclerc settled for P4, while Alex Albon had a stormer of a race to work his way to P5 by the chequered flag.

Lance Stroll finished P6 for Racing Point. He had been behind Nico Hulkenberg for the entire race, after a brilliant start to end up directly behind his temporary teammate. But a late stop for Hulkenberg for Soft tyres sent him back to P7.

Pierre Gasly claimed P11 for Alpha Tauri, while Sebastian Vettel finished a distant P12. The Ferrari driver had another dismal day at the wheel, spinning off by himself at Turn 1 before spending the race recovering back to his finishing position. Carlos Sainz was P13 for McLaren after a tough day for McLaren, as well as a slow pitstop for the Spaniard.

Daniel Ricciardo finished P14 after spinning his Renault while battling with Sainz in the closing stages, while Kimi Raikkonen finished P15 for Alfa Romeo. Romain Grosjean was P16 for Haas, with Antonio Giovinazzi P17 for Alfa Romeo. Williams finished at the back with George Russell and Nicholas Latifi respectively.

The sole retirement was Kevin Magnussen, with Haas withdrawing him to the garage with a mechanical issue towards the end of the race