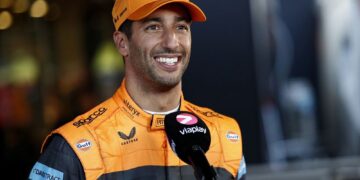 Daniel Ricciardo to race in Bahrain this weekend.

McLaren have confirmed in a statement that Daniel Ricciardo is fit to race and will compete in this weekend’s Bahrain Grand Prix, testing negative after recovering from Covid-19.

Following confirmation from McLaren that Ricciardo would be absent from day one of the Bahrain pre-season test due to illness, the team confirmed on the second day that he had tested positive for Covid-19.  With Ricciardo unable to take part in any testing duties, teammate Lando Norris took over testing for the team across the three days.

With Ricciardo in isolation and possibly unable to race, McLaren did have several options available to fill his seat, though the team believed that Ricciardo would be declared fit for the season opener. Reserve options on Mercedes reserve drivers Nyck de Vries and Stoffel Vandoorne were available, as well as former Force India driver Paul di Resta, should they have been needed.

Alpine then made Oscar Piastri available, so the reigning F2 champion could get experience behind the wheel of an F1 car as he starts a year on the sidelines as Alpine’s reserve driver. However with Ricciardo declared fit, the team will not be taking up this option.

In a short statement the team said “McLaren F1 Team confirms that after testing positive for covid-19 last week, Daniel has now returned a number of negative tests and will therefore return to the paddock on Thursday ready to compete in this weekend’s Bahrain GP.

Daniel has been feeling better each day as he continued to recover while in isolation following local regulations in Bahrain”.

Ricciardo will start the season with limited time in the new MCL36, his only running coming from his shared allocation with Norris at the Barcelona shakedown test.  This will likely have an impact on his start to the season, as he looks to improve on a challenging first year at McLaren, finishing eighth in the standings, 45 points behind his teammate.

Struggling at points to extract the same speed from the car as Norris during last season, Ricciardo bounced back to lead home a McLaren one two at the 2021 Italian Grand Prix in Monza, ending McLaren’s long nine year winless drought.