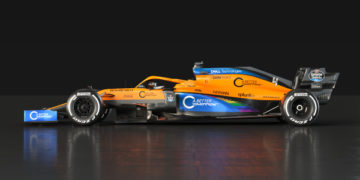 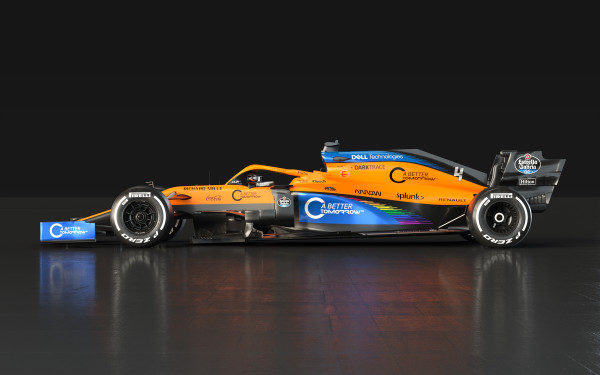 Austrian Grand Prix – McLaren has tweaked the livery of its 2020 MCL35 to incorporate the new #WeRaceAsOne initiative.

McLaren have revealed the tweaked livery that will feature on its MCL35 this season, after incorporating the new Formula 1 initiative #WeRaceAsOne logo and concept.

Formula 1 announced the initiative last week, aimed at changing and normalising the mindset of diversity into motorsport.

All the teams are fully onboard with the idea, and are incorporating the logo into their car’s liveries.

Last week, McLaren announced its support for F1’s campaign which aims to raise money for charities fighting the COVID-19 pandemic but which also aims to fight racism and improve diversity in the sport.

The MCL35 will race with the #WeRaceAsOne rainbow stamped on its halo, as well as featuring on the end section of the car’s sidepods. The message ‘End Racism’ is also on the inside of the halo, similarly to the Mercedes’ design.

“F1’s #WeRaceAsOne initiative is something we have been working on together with F1 for some time, to honour and thank those who have led the frontline response to covid-19, and to support those who are being particularly badly affected by this terrible disease,” said McLaren boss Zak Brown.

“We also stand unequivocally united with F1 in support of its ‘End Racism’ message, which will be carried on both McLaren race cars in Austria. McLaren has always embraced a culture of diversity and inclusion, and we recognise the need to do more in this space. Our ‘End Racism’ message will be supported by an active programme to engage with our employees to listen and understand how we can build a better plan to address key issues relating to diversity, equality and inclusion. There is absolutely no place for intolerance in this world and we are committed to driving greater diversity, inclusion and equal opportunity across our organisation and the sport as whole. ”

The team are also expected to launch a new range of special merchandise this week, with the profits raised from sales going to the #WeRaceAsOne initiative. Liberty Media and Formula 1 CEO Chase Carey provided the initial funding for the campaign.