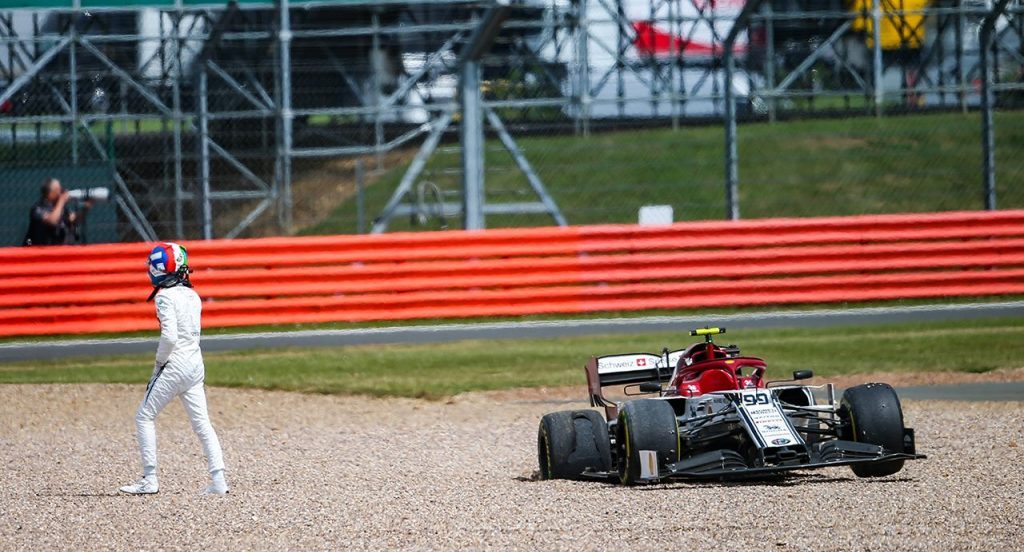 British Grand Prix – Alfa Romeo’s Antonio Giovinazzi’s spin out of the race was caused by a mechanical failure on his car.

Antonio Giovinazzi was one of three retirements from the race at the F1 British GP at Silverstone on Sunday. The Alfa Romeo driver joined the two Haas drivers of Kevin Magnussen and Romain Grosjean on Lap 20 when he spun out of the race and got beached in the gravel into Club corner on Lap 18.

This proved a pivotal moment in the race as the car’s location triggered a full Safety Car that ended up proving decisive in the battle of the two Mercedes drivers out front, and gave Lewis Hamilton an advantageous pitstop.

Giovinazzi clambered out of the car as the race was neutralised, having tried to get the car out of the gravel with no success. Afterwards, Alfa Romeo explained that it was a mechanical failure on the car that led to Giovinazzi’s retirement. While not divulging the exact details, it’s worth pointing out that only the right rear wheel was spinning on the car as he tried to escape the gravel trap.

“It is disappointing not to finish the race – something went wrong with the car and put me in the gravel but we don’t yet know what. We will investigate when the car is back.” said Giovinazzi.

The Italian driver has recently enjoyed an uptick in performance this season, scoring his first F1 points last time out in Austria. He also outqualified Kimi Raikkonen again on Saturday, his third time to do so in the last four rounds. Having fallen behind Kimi in the first stint of the race, Giovinazzi says he was confident of being able to bring the car home in the points again as Raikkonen went on to finish P8: “It’s unfortunate but it’s how racing goes.”

“I was quite close to Kimi and we were on similar strategies, so I could have been in or close to the points, but we can still be pleased about our performance. We scored a good result for the team and we made another step forward. The midfield is very close so we need to keep working hard to remain there.”