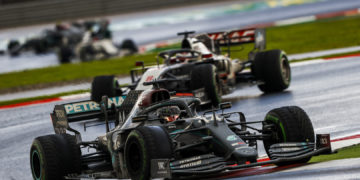 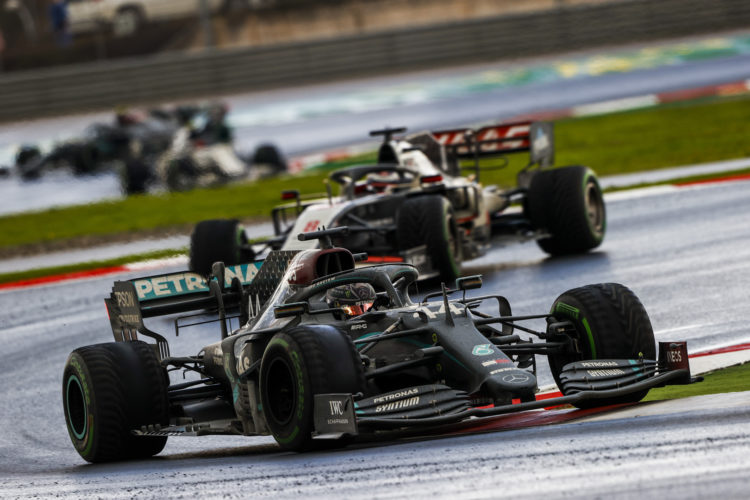 Mercedes have explained why they struggled in Saturday’s qualifying at Istanbul Park, before coming to life in the race.

Lewis Hamilton may have eventually won the Turkish Grand Prix with a 20+ second lead in hand but, on Saturday, Mercedes struggled in qualifying in the wet conditions.

While usually the dominant car over a single lap, Mercedes could only manage P6 with Hamilton and P9 with Valtteri Bottas.

Speaking after the race weekend, Mercedes’ James Vowles explained why they struggled so much compared to normally:

“On Friday the lap times evolved by over ten seconds, to provide an idea to how much that circuit was evolving, and it continued to evolve both in qualifying, even though we were on Wet tyres, and during the race.”

“The significance of that is that it’s such a different circumstance to normal, the teams had to adapt very quickly to get the tyres working, to generate enough energy, to generate enough temperature and we for sure were on the bad side of that compared to our competitors.” Vowles contined.

“Both Racing Point and Red Bull were clearly class-leading in that circumstance, but also in FP3 Ferrari were there or there about able to generate temperature. So, if you go through qualifying step by step, it will highlight the issues.”

“In Q1 when cars were on the Wet tyre doing multiple laps and we weren’t poor relative to the field at that point, in fact both of our cars were in the top five, Verstappen who went out on Intermediate tyres was nearly out of the session. But at the end of Q1, after multiple red flags, we saw the true extent of the problem.”

Vowles explained that Mercedes simply weren’t able to generate sufficient tyre temperature, unlike some of their rivals: “All teams, all drivers had just one timed out on Wets to make it work. Verstappen’s time was incredibly quick relative to our own. We just can’t generate the energy and temperature in the tyres on one lap. Furthermore, whenever you see these big discrepancies between drivers and teams, not tenths but seconds. It’s not traditionally car performance that’s dominating this anymore. It’s about tyre temperature and getting the tyres into the correct window.”

“In Q2 it was a long run on Wets for everyone and again, we were offset by Verstappen by two seconds. Not the differences we were seeing at the end of Q1 but even so a large, large performance offset. And in Q3, Stroll did exactly the same run plan we did, with one timed lap on Wets followed by two timed laps on Intermediate tyres after it was proven to be faster. And yet there was five seconds difference between the two teams. So if you dig into why, it is all about the energy that you are putting into a tyre, which the engine will produce energy as you turn and rotate the rear tyres and generate slip, the brakes will generate energy, both front and rear, and again that will go into the tyre.

“But obviously the ground is wet, and the rain is taking away energy from the tyres continuously, so it is all about putting more energy in than is being taken away by the conditions. The faster you are in certain parts of the track, the more energy you generate and the more temperature you generate, but where we were with our car in those conditions was offset relative to the leaders.”

“So much so we couldn’t generate the performance required. We don’t build a car for these conditions. We’re building a car that works on tracks in a normal range of temperatures that we are expecting, be it wet or dry, and clearly we ran out of tools and authority to be able to change what we needed to, in this occasion to generate thetyre temperature.”

“We don’t have all the answers, but we are reviewing exactly what we would do now with a new set of components or setup changes should this circumstance appear again.”

“It is unlikely to in Bahrain and Abu Dhabi, the two circuits that are coming up towards the end of the year, but it’s all likelihood could reappear again in the near future and we need to be prepared.”