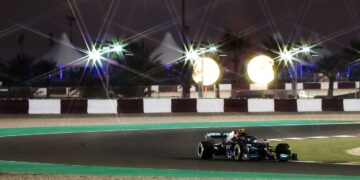 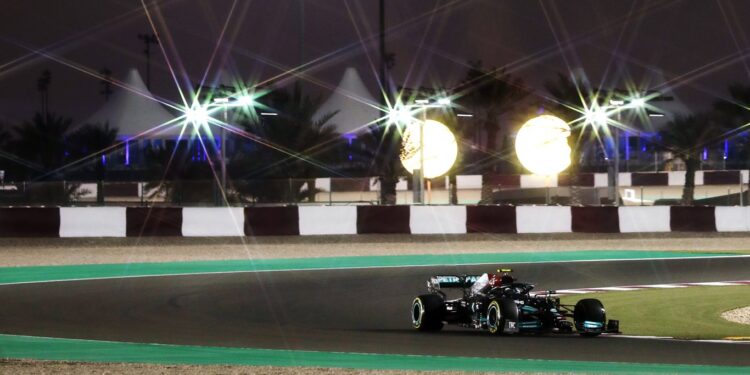 Qatar Grand Prix – The pendulum swung towards Mercedes on Friday as Valtteri Bottas topped the timesheets in second practice ahead of the inaugural Qatar GP.

As night descended on the Losail International Circuit, the drivers got their first taste of what conditions will be like for the race on Sunday. With many of the teams running the soft tyres for second practice, drivers started their qualifying simulations with Bottas’s early lap time deleted for exceeding track limits.

When he fit a brand new set of the red-marked soft tyre, he crossed the line to set a 1:23.148 before running a race simulation for the rest of the session.

Championship contender Lewis Hamilton put his Mercedes in fourth place, less than a tenth off championship leader Verstappen’s time. The Briton has seemed to struggle throughout Friday, with Hamilton only setting the fourth fastest time on Free Practice One as well.

Lando Norris put his McLaren in fifth place, demonstrating stronger pace than earlier, and recovering from a technical problem which forced the driver to the sidelines early in FP1.

Lance Stroll had a much better session in the Aston Martin and set the sixth fastest time, ahead of Yuki Tsunoda in the other AlphaTauri. Sergio Perez had another quiet session finishing in eighth place for Red Bull.

Sebastian Vettel made it two Aston Martin’s in the top ten with a time good enough for ninth, whilst Carlos Sainz rounded out the top ten for Ferrari.

The two Alpine cars of Esteban Ocon and Fernando Alonso finished in 12th and 13th respectively, whilst Charles Leclerc set the 13th fastest time. McLaren’s Daniel Ricciardo was close behind in 14th place with ex-world champion Kimi Raikkonen down in 15th for Alfa Romeo.

George Russell posted the 16th fastest time for Williams, ahead of Antonio Giovinazzi in the Alfa Romeo. Nicholas Latifi was in 18th for Williams with Mick Schumacher in 19th for Haas.

Haas driver Nikita Mazepin was unable to take part due to a an ongoing chassis change for the Russian driver.