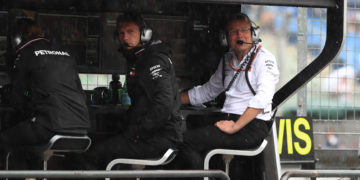 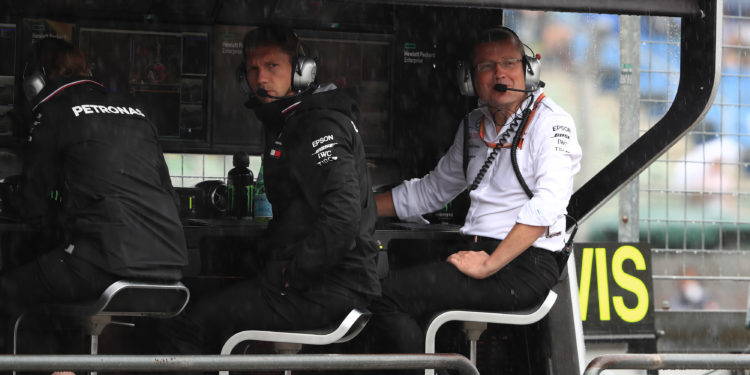 Picture is of Simon Cole, another guy who works for Mercedes, and not Andy Cowell. The two of them look remarkably similar and wear the same uniform. Hopefully, you won't notice.

Mercedes have confirmed a new senior management structure for their engine department as Andy Cowell will leave his role as Managing Director.

Andy Cowell, who has led the department as Managing Director since the end of 2012, will leave his role at some point in early 2021. He has worked for Mercedes’ engine department in senior roles since 2004 (the last year the company was called Ilmor before being renamed by Daimler).

Cowell informed Mercedes of his intention to depart back in January, and has since worked together with Toto Wolff (team boss at Mercedes-AMG F1 Team) and Markus Schafer (from Daimler’s Board) in order to come up with a succession plan.

Cowell’s responsibilities are to be shared across a few people. Hywel Thomas will be promoted to Managing Director with direct responsibility for the F1 power unit. Adam Allsopp will be the Project One (a Mercedes roadcar project) Powertrain Director and will report directly to Schafer.

Richard Stevens will become Operations Director, and Ronald Ballhaus will become Finance and IT Director. The Formula E side of things remains the same, with Powertrain Chief Engineer Pierre Godof remaining in charge.

Mercedes say Cowell will remain onboard and working alongside Hywel Thomas to ensure a smooth transition, with Cowell expected to leave at some point in early 2021.

“After 16 enjoyable years working for HPP, I have decided that now is the right time to move on from my role and seek a new engineering business challenge.” said Cowell. “I have appreciated the opportunity to work with Markus and Toto in defining the future leadership structure of the company and I have every confidence in the ability of Hywel and the team to lead the company forward. It has been an absolute honour to work for Mercedes and especially to be Managing Director of HPP for seven years.

Mercedes’ engine performance has been a key factor in their championship dominance in the Hybrid era, with team boss Toto Wolff thanking Cowell for his part in their success: “He has made an outstanding contribution to our motorsport legacy and I have valued and enjoyed our working relationship since 2013; I am sure he will enjoy great success in the next challenge he decides to take on. Our philosophy has always been that a winning team is a dynamic organisation, and that change is a natural part of every company’s development.”

“I am particularly pleased that we have been able to work together to create a new leadership structure, by building on the strength in depth of the team in Brixworth. It puts us in a very strong position for the years ahead, as we aim to set new benchmarks in Formula One and Formula E.”