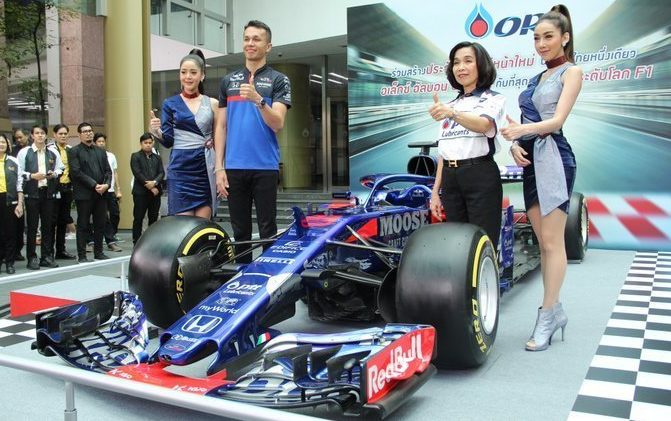 German Grand Prix – Toro Rosso has announced two new Thai sponsors, arriving on the back of Alex Albon driving for the team.

In the week leading up to the F1 German Grand Prix at Hockenheim, Toro Rosso has announced two new sponsors to add to their roster. With Alex Albon being of Thai descent, his home market has become increasingly interested in Formula 1 since his arrival into the sport.

On Tuesday, Toro Rosso announced that Albon has become a brand ambassador for Thai oil brand PTT Lubricants. At a press conference held in Bangkok, Thailand, they announced that PTT Lubricants logos will feature on Albon’s and Daniil Kvyat’s race overalls and the STR14 from this weekend’s race at Hockenheim onwards.

According to press material, the partnership between PTT and Toro Rosso is aimed at helping to increase the visibility and popularity of F1 in Thailand.

Jiraphon Kawswat, President & CEO of PTTOR, said: “We are proud to support Mr. Alex Albon, the sole Thai driver in this prestigious international competition. As our brand ambassador we wish Alex great success, and no matter the outcome of the competition he will be the winner in the hearts of Thai people everywhere.”

This announcement comes just a day after Albon was also unveiled as brand ambassador for Moose – a Thai apple cider company. The Moose logo will also be featured on both drivers overalls and the cars, while also appearing on Albon’s helmet from Hockenheim onwards.

Moose, Thailand’s premium apple craft cider, today announces Alex Albon as their first ever brand ambassador as part of a new partnership with Scuderia Toro Rosso. As an official partner to the team the Moose logo will be featured on both drivers’ race overalls, the STR14 cars and on Alex’s helmet from the 2019 German Grand Prix onwards.

Toro Rosso team boss Franz Tost said: “Moose is a famous Thai brand and we are very proud to work together. It’s fantastic to have a Thai company invest in the team and it’s a clear demonstration of Alex’s growing popularity in the country and the progress the team is making. We hope we can gain many more Thai fans over the months to come.”