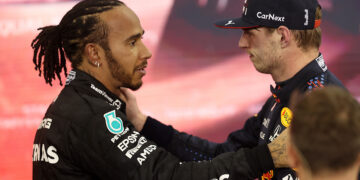 Seven-time World Champion Lewis Hamilton will decide whether to commit to Formula 1 for the 2022 season following the outcome of an inquiry into the 2021 Abu Dhabi Grand Prix.

Hamilton lost out on last seasons’ championship to Red Bull’s Max Verstappen after late drama which saw the safety car deployed and only the cars between the two title contenders allowed to pass. As a result, Verstappen, on much fresher tyres, was able to overtake the Mercedes driver on the final lap of the race to be crowned Champion.

Hamilton was described as “disillusioned” with F1 by Mercedes team boss Toto Wolff as a result of the decision with insiders saying the 37-year-old has lost trust in the FIA, F1’s governing body.

Both Mercedes and Hamilton are awaiting the outcome of any action taken by the FIA with the governing body launching an enquiry into into the events which lead to the Mercedes driver losing out on the championship.

Hamilton is signed to Mercedes until 2023 and will partner ex-Williams driver George Russell for the 2022 campaign. Should Hamilton decide to leave F1, or even take a sabbatical, it’s remains unclear who would be likely to replace the Briton.

Hamilton has been quiet on social media throughout the winter break so far and has yet to make an official media appearance. Recently elected FIA president Mohammed Ben Sulayem has been in touch with the Briton and last week said: “I don’t think he’s 100% ready to respond right now, we don’t blame him. I understand his position.”

As reported by the BBC, senior F1 insiders have growing concerns that the FIA has not “fully grasped the threat to the sports’ credibility” following the Abu Dhabi GP.

The BBC also reports that a source inside Mercedes had dropped their appeal against the results of the finale after agreeing that Michael Masi, F1 Race Director, and Nikolas Tombazis, FIA’s technical chief of single-seaters would be removed from their positions.

An appeal was lodged by Mercedes immediately following the race, but was rejected by the stewards hours later. The team then gave notice of their intention to appeal the decision, but withdrew it after talks with the FIA.

Wolff said the Masi was “freestyling the rules” adding: “robbing him in the last lap of the race is unacceptable”. However, the Austrian has said that the situation points to a much larger issue into the sport.

“It’s not only a decision to change the race director”, said Wolff, “the whole system of decision-making needs to be improved.

“The race director is certainly under big pressure and some of that is due to our own faults.”

Pre-season testing kicks off in just over a months’ time when the new brand of F1 cars takes to the track at the end of February in Barcelona.