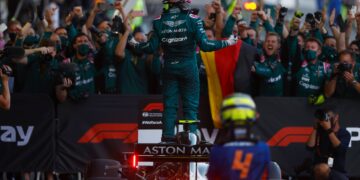 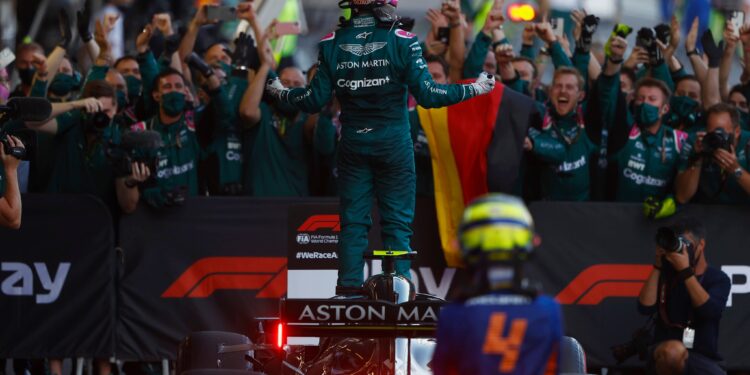 Azerbaijan Grand Prix – Aston Martin’s Sebastian Vettel was elated with his first podium of the season and the teams’ maiden top three finish in Formula 1.

The four-time world champion drove a solid race running long on his first soft tyre stint. This allowed the German to overcut those who pitted for hard tyres early and gave him fresher tyres to attack later in the race.

Vettel explained that, after a difficult start to the season for the British marque, the second place finish is a boon to the team.

“I think it means a great deal, obviously it’s been a tough start for us,” said a thrilled Vettel after the race. “I think it was a great race, we had good pace, that was the key obviously we had a good start, made some positions straight away then looked after my tyres.

“As soon as everybody went into the pits, I’d really good pace to overcut, you can see the restart worked brilliantly for me. And, yeah, I mean, we obviously have fresher tyres which I guess helped warming up the tires later on so, yeah, great day, I mean, I’m over the moon.”

Vettel started in 11th place having narrowly missed out on a top ten start in qualifying, but starting on the new tyre was an unexpected benefit for the German who was able to make gains on his fresher tyres early in the race.

As a result of not taking part in Q3, Vettel had a fresh set of soft tyres for the sprint finish at the restart late in the race. This allowed Vettel to move up to second following Lewis Hamilton’s off at Turn 1.

“I think this is great obviously a podium we didn’t expect that when we came here, but, already on Friday, even though we were nowhere, it felt good. I was quite relaxed and yesterday we didn’t quite get it but today [is] even sweeter,” said Vettel, who was voted as Driver of the Day.

“It’s always better to start further up but the new tyre for sure didn’t hurt because other people had a couple of laps on from qualifying so it helped us to go longer but we really preserved the tyres well and I think that was the secret plus the pace that we had, I think, in the race and the car felt good and that was the key to keep progressing and move forward.”