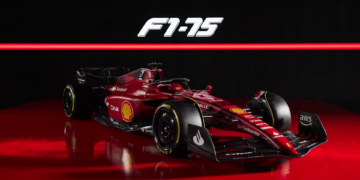 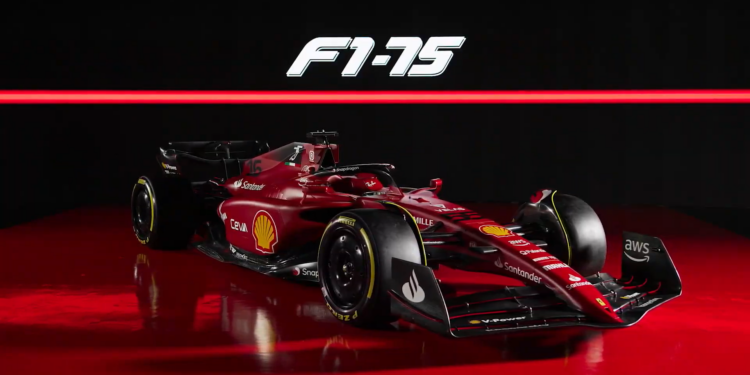 This afternoon Scuderia Ferrari took the covers off their 2022 car, the F1-75, named to celebrate 75 years since the first Ferrari-badged car was produced.

In a concise and stripped back presentation Ferrari Team Principal Mattia Binotto also played the role of host as he and the two Ferrari drivers, Charles Leclerc and Carlos Sainz, took part in the launch video for the F1-75.

Binotto said that the car, sporting a new red and black livery, is a product of innovation, passion and creative thinking in regards to the 2022 regulations. And indeed the car does bear that out, adding another variation on side pod and nose design to the cars already unveiled.

“The car is a product of the effort, dedication and passion of each one of us,” said Binotto. “It’s down to the work of a group of people who have invested everything in this car, working with courage, creativity and team spirit.

“We have tackled the challenge of this project with an innovative approach because, apart from the requirements of the completely new technical regulations, we believe that we had to take on this exercise with an open mind.

“We have definitely put our heart and soul into this car. It’s what I would call a brave Ferrari because we have interpreted the rules by thinking outside the box.”

He described the car as the culmination of all the changes that have been made within the Italian marque over the past few years.

“We know that expectations are high,” Binotto continued. “And that, in recent years, the results have not lined up with what is expected of the Ferrari name. We went in a new direction in 2019 and even if there have been some difficult moments along the way, it has delivered a stronger and more unified team and this car is the perfect expression of all our efforts.”

Leclerc, who is headed into his fourth season with the team, said that expectations are high and both he and the team are aiming to meet them.

“I’m working as hard as I possibly can to improve year after year,” Leclerc said. “This season is going to be a very important season for the team, for ourselves as drivers, and it is a good opportunity too so the expectations are very, very high for everyone but we are making sure that, with all the work that we’ve done behind the scenes, that we will achieve great results during this season.”

The Monegasque driver is also a fan of the new car design, but said: “I will love it even more if it’s fast on track but I absolutely love the look. It’s a bit of a darker red, looks a bit more aggressive and for a car like this I think it fits perfectly.”

The team’s other driver, Sainz, took four podiums in his debut season with the team and was praised by Binotto who thought he “ fit very well in the new environment.”

“2021 was a great year for me,” Sainz said. “Because I managed to learn how the team works on the inside, to adapt to a new environment but also mainly to learn about the Ferrari brand and how everything works in here and it was a great experience for me. Now it’s time to take the team to a different level, take it to another step and us drivers and the team together we want more things and more success in 2022.”

The Spaniard was another driver to point out the visibility issue with this season’s larger tyres though, apart from that, he feels they are the right move.

“We tried them last year on last year’s car and it already felt like a step in the right direction. It should give us the ability to push a bit more in the races, challenge the cars in front, a bit more racing and the only question mark remaining is the visibility. [The tyres] look big and it looks like [the winglets] might cover a bit, so in street circuits it might be difficult.”

The F1-75 itself also ticked the boxes for Sainz, as he described it as: “Aggressive and I think it looks beautiful also. I like it because it’s just radical and it’s what you want to see when you see a new car.”