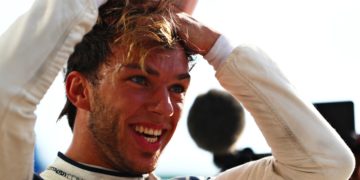 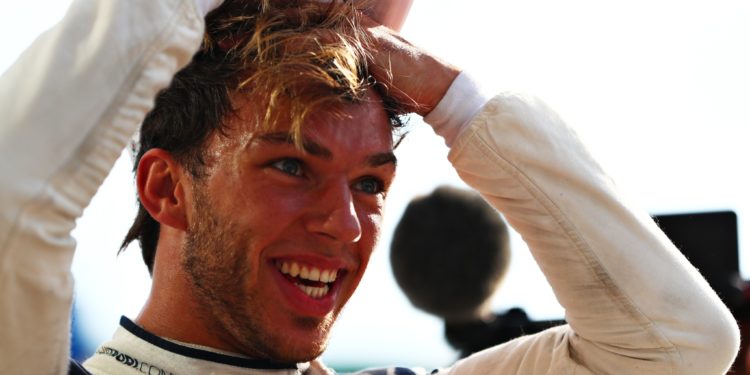 Gasly started the Grand Prix in tenth place however his race didn’t really come alive until the mid-race Safety Car period. At that point the pit lane was closed to allow the marshals clear the stranded Haas of Kevin Magnussen from the side of the track just before the pit entry.

Once the pits were open again the majority of the pack pitted for their mandatory tyre change, Gasly however had made his stop prior to the Safety Car and as a result was boosted from outside the points up to third.

A red flag followed a few laps later when Charles Leclerc lost the rear of his Ferrari at the Parabolica and during the race suspension the stewards announced that Lewis Hamilton and Antonio Giovinazzi, who were first and fifth respectively, would each receive a 10 second stop-and-go penalty for pitting while the pit lane was closed.

At the restart Gasly slipped past a slow starting Lance Stroll to take second which quickly became the race lead as Hamilton served his penalty. The Frenchman had a bit of free air to the chasing pack but once Carlos Sainz moved into second the gap started to close.

“We capitalised on the red flag. The car was fast and we had a pretty fast car behind us. It’s just crazy and I’m so happy, I can’t thank them enough, everybody from AlphaTauri to Honda. I mean, it’s a power sensitive track and we won the race ahead of all the Mercedes, Ferrari and Renault cars so it’s just an amazing day.”

Gasly held his nerve and his position though, crossing the line less than half a second ahead of the McLaren to take his second podium for the Toro Rosso/AlphaTauri team. Gasly’s team radio after crossing the line was a mix of disbelief and joy. “Oh my god, what did I just do? Did I win the [expletive] race? Yeeeah. Oh my god. Oh my god, guys we did it again. Oh my god, yes! Wooo.”

Today’s result means that Gasly is the first French winner of a Formula One Grand Prix since Olivier Panis was victorious for Benetton at Monaco in 1996, when Gasly was only three months old.

“Olivier Panis was the last one. I’ve always said coming in F1 ‘okay that’s one thing we need to change’ because it’s been so long, but I never expected that it would happen to us with AlphaTauri.”

“I’ve been through so much in the space of 18 months. My first podium last year I was like ‘woah’ with AlphaTauri and now my first win in Formula 1 in Monza.

“We just kept focusing on ourselves since last year, working, improving step by step and it’s crazy honestly, I’m just so happy.”