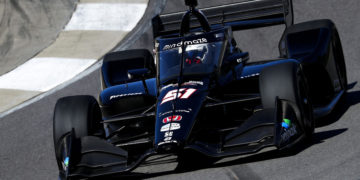 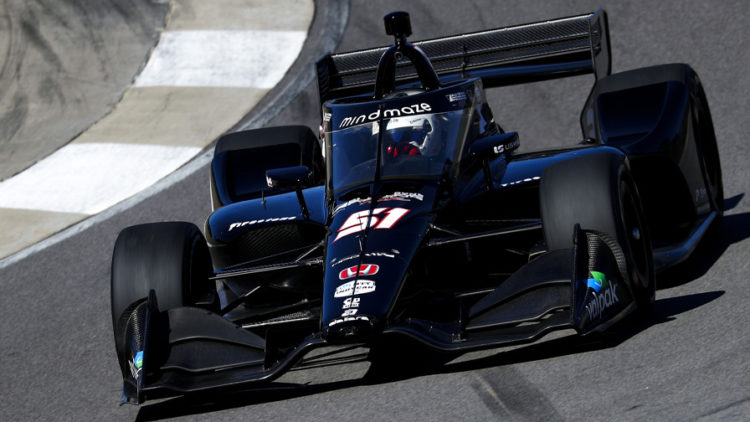 Romain Grosjean says he felt completely ‘at home’ after his first day in an IndyCar, having completed a day of testing with Dale Coyne Racing. Romain Grosjean stepped back into a racing car on Tuesday, the first time in a car since his frightening fireball crash in Bahrain while driving for the Haas F1 team in November.

With his F1 career on the verge of concluding anyway, Grosjean’s injuries prevented him from taking part in the final two races of 2020 as he concentrated on spending time at home with his family and recovering from his burns.

Having signed up to race a part-time programme with Dale Coyne Racing in 2021, Grosjean flew to the United States to take part in pre-season testing at Barber Motorsports Park in Alabama. Speaking to media including FormulaSpy at the end of the day, an enthusiastic but fatigued Grosjean said he already feels comfortable in his new environment: “It felt good. It really felt like home, you know, at the beginning obviously it’s a new car so I had to adjust to my new driving position. But things quickly felt quite smooth which was good. I quickly discovered the joy of no power steering! I don’t regret all those hours in the gym, but I might do a few more just in case!”

Completing 80 laps of the circuit, unofficial timing clocked Grosjean’s best time as a 1:07.876. The best time of the day was set by Josef Newgarden with a 1:07.039. While Grosjean’s day was largely smooth, he had an off at the first corner early in the morning session that resulted in damage to the car. He explained that the incident was purely down to him applying his F1 driving technique to the car: “I found the limit this morning in Turn 1, which I wasn’t happy with. But I understood something you could do in F1 you cannot do in IndyCar so a good learning experience. I went too fast in. When I was on the brake, I also picked up the throttle. Because it’s a mechanical differential, it opens the diff when you do that. It makes the car loose while, in F1, it stabilises the car. So a learning experience!”

“I need to keep adapting my driving style and understand how to go fast in an IndyCar because it’s a bit different to an F1 car.”

Expanding on some of the other differences he found with his new IndyCar compared to the F1 machinery he’s used to, he said: “It’s very physical and tough driving these cars, in a different way to F1. You fight the G-Forces in F1 while here you’re fighting the heaviness of the car. It’s quite cool!”

“There’s less power, for sure. The mechanical grip of the car is outstanding, trying different lines and smoothen it the way you want. I could go on for a long time comparing F1 to IndyCar but that would do no favours for anyone. There’s lots of mechanical grip, less aero than an F1 car and less power. The driveability and modes and maps on the engine worked really well.”

“It’s definitely the hardest steering I’ve had to cope with.” Grosjean continued. “The first few laps the muscles weren’t ready or warmed up, but it got better at the end. I know exactly what to work on with the team and what to do. I’ve heard it’s the hardest track of the year which is good to start with so we have a baseline of what it’s going to be like. I didn’t know what to expect but now it’s pretty clear.”

The big question mark for Grosjean ahead of his return to a racing car was how his burned hands, although significantly healed, would respond to the physicality of driving a car again. He explained that it ‘wasn’t perfect’, but his concerns had been allayed: “It went OK. It’s not perfect, there’s a big blister on my left thumb which isn’t pretty but driving wise it was OK and not painful. I didn’t really feel it in the car. I was being careful going near the kerbs but generally it hasn’t been a limitation.”

“Putting the gloves on isn’t always nice so I tend to keep my left glove on and protect it from the sun.”

That helmet ❤❤❤
I'm so happy to finally wear it. It means much more than I could even imagine when it was created at home early November. @marionjolles, Sacha , Simon & Camille will be with me more than ever 😍😍😍😍😍😍😍😍#r8g #indycar #us2021 pic.twitter.com/P3DpoNia9W

Grosjean has been very transparent about the impact his Bahrain crash had on his family, particularly on his three young children. Driving the test in the unraced helmet design his kids designed for what would have been his F1 swansong in Abu Dhabi, Grosjean said his family understood that he was returning to what he loves doing most: “They were super excited. I’ve been sharing and talking with them a lot. I’ve video called them and showed them the car, they were happy! It was hard knowing I was going away for 18 days but they were happy but we’re sharing pics and they know their daddy is doing what he likes and that’s important for them.”

Asked about the reception he’s received from the other drivers he’s met, Grosjean said the vibe has been friendly so far: “It’s been great, I’ve had some good interaction with Sebastien Bourdais and Takuma Sato came over. Simon Pagenaud gave me a wave in the pitlane so it’s been a good day. I have a good relationship with my teammate Ed Carpenter. I told him I used to be an asshole as a teammate back in the day! But I’m 35 now and I’d like us to be friendly. On track, I want to beat them but if we can be friends off track that’s mega. It’s all very different to what I’m used to.”