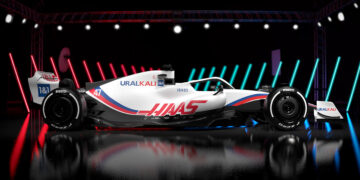 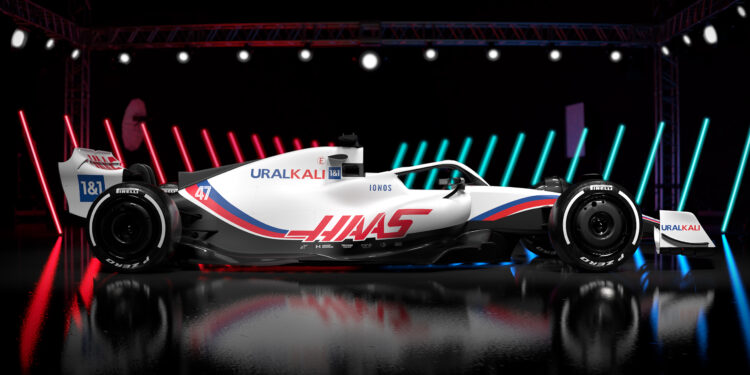 The Haas Formula 1 team has revealed an unchanged livery for their 2022 challenger and becomes the first team to reveal their latest car.


Haas, with their new chassis, the VF-22 is the first glimpse of how F1 will look in 2022 with an online reveal released through digital renders. It is expected that the real design will not be made apparent until testing pre-season testing later in February.

The car livery is an update from last season, title sponsor Uralkali influencing the continuation of a white design with red and blue stripes.

The US-based outfits 2022 car is the first to be designed by Simone Resta, assisted by the team’s new design office in Marenello, Italy. The team hopes the ex-Ferrari man and his new technical structure will help propel them further up the grid after a low-key 2021 campaign.

“The VF-22 is the first entry to emerge from the American-owned team’s all-new design-office in Maranello, Italy – led by Technical Director Simone Resta,”, said a team statement

“Bringing together a new personnel group and weaving it into the existing fabric of the team…was just one of many challenges tackled through 2021 culminating in the design of the VF-22 – a car which has its genesis in a completely new set of regulations”.

Haas effectively abandoned all development of their 2021 car to focus all resources on their 2022 challenger, running a continuation of it’s 2020 design.  The team is aware this strategy has risk, but believes this was the best approach. Team owner Gene Haas has high hopes for his new car and aims to be challenging the top ten in 2022.

“We made the decision back in 2020 to really channel time and resources into the VF-22, foregoing anything track-related for 2021 – which wasn’t easy to watch,” said Haas. “Hopefully that decision bears fruit and we return to challenging for points and taking something from the weekends”.

While 2021 saw limited on track progress for the team,  the investments in the new Maranello design office as well as a new design team for the 2022 car has team principal Guenther Steiner optimistic of the year ahead.

“It’s exciting to be at the point where we know the VF-22 will be on-track shortly,” said Steiner. “With our new design team in place, I’m confident we can showcase once again that we can compete on weekends. Last season was a long one but I’m confident that 2022 will see us back in the mix with the VF-22.”

Despite the upbeat outlook from the team, Technical Director Simone Resta has said 2022 will be a  transitional season as the new team gels together:

“We’re still early in the project and going through a transitional season of working together on a car for a full year, but if we look back where we started, this team is already a success” Resta concluded.

Haas will join all F1 teams on February 23rd in Barcelona for the initial shakedown test of the 2022 challengers.