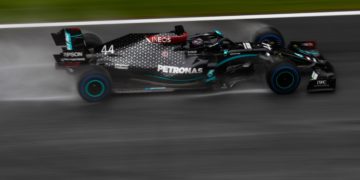 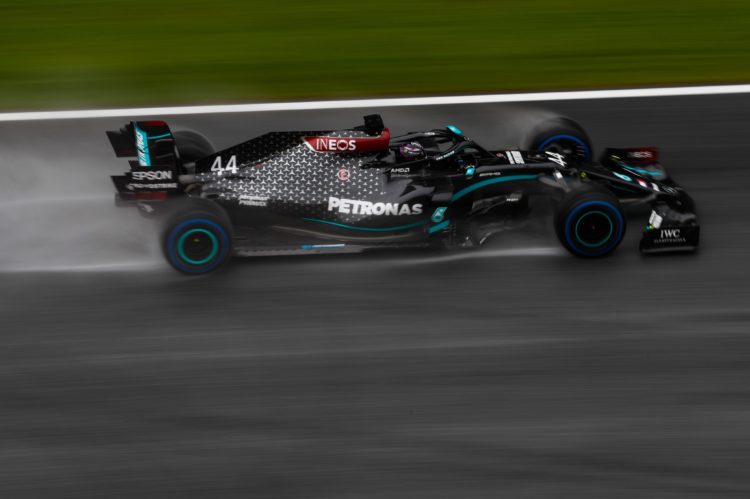 Lewis Hamilton has taken pole position at the Red Bull Ring, following a delayed qualifying session in Austria. The reigning Champion splashed his way to a 1:19.273 throughout Q3, as the laptimes continuously improved as the drivers found more grip and confidence.

Hamilton had been embroiled in a tense battle with Red Bull’s Max Verstappen, who had traded fastest times with the Mercedes throughout the session. However, Verstappen made an error on his final run as he appeared to be distracted by the pitting Sebastian Vettel at the second last corner. This resulted in a high speed slide for Verstappen, ruining his lap.

Verstappen was forced to settle for P2 as a result, more than a second down on Hamilton. Carlos Sainz continued to underline McLaren’s improved pace as he claimed P3, and just over a tenth down on what Verstappen had managed. Valtteri Bottas, last week’s winner of the Austrian Grand Prix, finished P4.

Esteban Ocon claimed a sensational P5 for Renault, in what was only his second qualifying session since returning to Formula 1 after a year on the sidelines. He was 1.6 down on the front running time, and just over 0.2 down on Bottas. Lando Norris qualified P6, but will start from P9 due to a grid penalty imposed on Friday.

Alex Albon was P7 for Red Bull Racing, just about fending off the Alpha Tauri of Pierre Gasly as the Frenchman put in a storming performance to get into Q3. Daniel Ricciardo was P9 for Renault, with Sebastian Vettel claiming a subdued P10 for Ferrari and almost two seconds down on the pace from Hamilton. The German driver won the intra-Ferrari battle to get into Q3, but spun off on his final lap of Q3 as he powered out of Turn 7.

Charles Leclerc finished P11 after a tough session as he struggled for pace in the second Ferrari, as the Scuderia suffered the embarrassment of two consecutive Q2 knockouts. George Russell was P12, in a brilliant qualifying session for Williams as they made it through into Q2 on merit. Russell was just 0.008 from Leclerc’s time, and 0.009 clear of Racing Point’s Lance Stroll in P13.

Despite their immense pace in Friday practice, it was a dismal day for Racing Point as Stroll led their charge. Sergio Perez was knocked out in Q1, qualifying just P17. Daniil Kvyat finished P14 for Alpha Tauri, with Kevin Magnussen P15 for Haas.

Kimi Raikkonen finished P16 for Alfa Romeo, with Nicholas Latifi P18 in the second Williams. Antonio Giovinazzi was P19 after spinning off and glancing the barriers in the final sector right at the end of Q1, while Romain Grosjean was last for Haas after spinning into the gravel on his outlap.