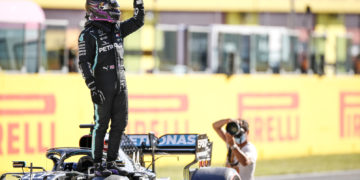 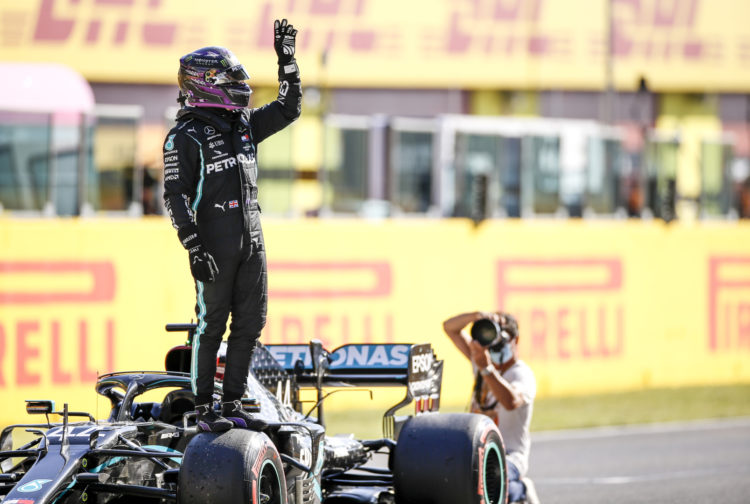 Click here for the complete results from the 2020 Tuscan Grand Prix.

Lewis Hamilton has claimed the win at Mugello after an incident-packed race which saw three separate red flag periods. Hamilton started from pole, but lost position to Valtteri Bottas off the first start. Chaos ensued with a clash between Kimi Raikkonen, Pierre Gasly, Romain Grosjean and Max Verstappen that resulted in Gasly and Verstappen retiring from the race.

The race was red flagged to clean up the mess and, on the second start, there was more chaos as several cars collided in the midfield. Bottas had slowed the pace along the main straight in order to protect his lead, but some drivers attempted to guess the moment to accelerate. Meeting slower cars in the middle triggered a chain reaction, and several cars were knocked out in a scary crash. McLaren’s Carlos Sainz, Haas’ Kevin Magnussen, Williams’ Nicholas Latifi and Alfa Romeo’s Antonio Giovinazzi were all knocked out on the spot.

On the restart, Hamilton swooped past Bottas into Turn 1 to take the lead and immediately began pulling away from his teammate.

Behind them, there was a tense battle between Racing Point’s Lance Stroll and Renault’s Daniel Ricciardo for the final podium spot. This appeared to be settled in Ricciardo’s favour as Stroll suffered an apparent rear tyre failure that sent him flying off the track. The resulting damage to the barrier resulted in another red flag stoppage to reset.

With the race essentially reset as the drivers fitted Soft tyres for the final 14 lap sprint to the end, Hamilton led Bottas away on the final start and controlled the gap until the chequered flag. He also set the fastest lap to ensure a clean sweep and maximum points, as Bottas settled for P2.

Daniel Ricciardo tried his best to hang on for a podium finish, but Alex Albon was able to power past in his Red Bull and he claimed the final podium position and the Renault driver was forced to settle for P4.

Sergio Perez finished P5 for Racing Point, with Lando Norris finishing in P6 for McLaren. Daniil Kvyat came home P7 in the sole Alpha Tauri, while Charles Leclerc took P8 for Ferrari. He had finished P9 on track, but a late five second time penalty for Kimi Raikkonen for a pitlane entry infringement moved the Alfa back to finish P9 behind Leclerc. Raikkonen lost just one position as a result of the penalty, with Ferrari’s Sebastian Vettel coming home in P10 in the final points position.

George Russell had a poor final start, and he fell right to the back of the pack, and lost out on a points finish as a result. He finished P11, with Haas’ Romain Grosjean the last classified runner.

Along with Stroll, Latifi, Magnussen, Sainz, Verstappen, Gasly and Giovinazzi with the aforementioned incidents, Esteban Ocon was the other retirement. The Renault driver suffered overheating brakes and was withdrawn on safety grounds during the second red flag.