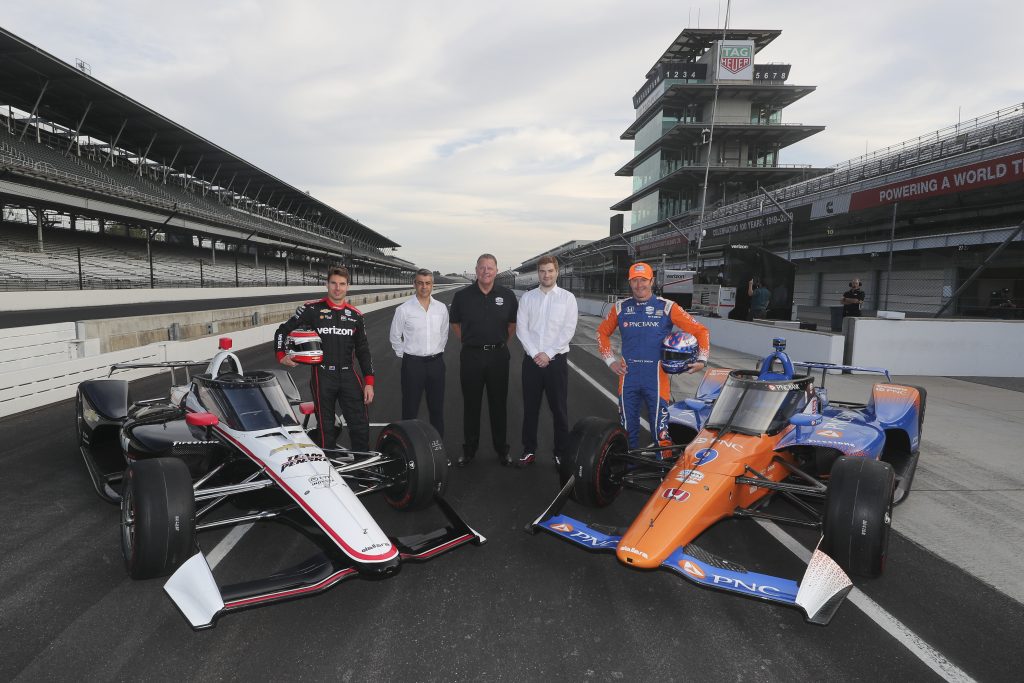 IndyCar has begun on track testing of the Red Bull-designed ‘Aeroscreen’ ahead of full scale introduction to the series in 2020.

The first on-track test of the IndyCar ‘Aeroscreen’ was carried out at the Indianapolis Motor Speedway in the United States on Wednesday. Developed by Red Bull Advanced Technologies, the Aeroscreen was tested by IndyCar Champions Will Power and Scott Dixon.

The pair carried out a full eight hour testing programme with Aeroscreen fitted to their cars, with both completely supportive of IndyCar’s move to introduce the cockpit protection system for the 2020 season.

Red Bull’s Aeroscreen concept was selected by IndyCar, and is a more advanced and enclosed system than the ‘Halo’ used in Formula 1. Now in development for seven months, this test was the first opportunity to carry out a real world test scenario for the device on contemporary cars.

While Formula 1 took the decision to go with ‘Halo’ for the 2018 season and onwards for the foreseeable future, IndyCar has gone the other route – this will mean a whole new data set for the FIA to consider for the Formula 1 regulations in the future. The Aeroscreen is a polycarbonate laminated screen with anti-reflective coating on the interior, a heating element to ensure no fog is generated and, to ensure the screen stays relatively clean, a tear-off system. Cockpit cooling ducts will also be a feature.

The Aeroscreen’s load bearing capabilities are expected to be around 150 kilonewtons – which is equal to the FIA’s Halo design.

Power ran 129 laps at a top speed of 224.591 mph while Dixon completed 128 laps with a best of 224.501 mph. Neither reported issues with visibility, head buffeting or car handling, and reported how pleased they were with the reduction of wind noise and buffeting. Dixon reported he could hear more over team radio that usual and said: “There’s actually a lot less load on the helmet. Visually, there’s been no (issue). Some of the areas with tear-offs and where they seam in the middle will be sort of fixed down the road to make it better.”

“It’s been an intense project and one that I think a lot of people have done their due diligence on to get it to this point,” Dixon continued. “Today’s been pretty much seamless.”

“I’m so impressed with how quickly all this came together,” Will Power said. “To have the first run in and really no major issues … it’s just little things that need to be worked on.”

“I’m so happy that we have it,” Power said. “It’s really a huge step in safety, and I think it’s the best of both worlds. You’ve got the halo and you’ve got a screen, so I think that you’ll see other open-wheel categories follow suit. When you’ve driven it for a day, you’re going to feel naked without it.”

“The first on-track test has been very positive today,” says Andy Damerum, Red Bull Advanced Technologies Commercial Development Officer. “The product is working well and the drivers have given excellent feedback, without experiencing any visibility issues. It has been a tight schedule from initial design to getting the Aeroscreen ready for on-track testing and we are proud to be working with INDYCAR to deliver the concept on time. We have a few further tests to complete but so far the screen is providing the safety performance requested. The next step will be for INDYCAR and Dallara to fine-tune the cockpit cooling and a number of teams will complete on-track tests in the coming weeks before the screen makes its race debut in 2020.”

INDYCAR President Jay Frye, who commissioned the project, commented, “We ran more than 100 laps and 250 miles of testing between the two cars this morning and we definitely checked a lot of boxes we needed to already. The foundation of the Aeroscreen is very sound and now we’re also working on the various accessories. It has been a hugely successful test thus far and we haven’t seen anything we didn’t anticipate. We had high expectations with this collaboration with Red Bull Advanced Technologies and their preparation and execution has been outstanding. They have left no stone unturned and will be proud of the final product.”

While F1 has initially opted for the Halo system, the different demands of oval racing led INDYCAR to prefer the Aeroscreen, adding protection against small object debris to the strength of the tubular framework, in a structure that also features sight lines more suitable for banked ovals. Working closely with chassis manufacturer Dallara, Red Bull Advanced Technologies has designed the Aeroscreen to utilise INDYCAR’s existing Advanced Frontal Protection spike as the forward mounting point, while also collaborating with the Italian firm to address issues such as helmet buffeting and cockpit cooling. Whilst next year’s car will be the first to race with the Aeroscreen, the system has also been created with the next generation of Dallara chassis firmly in mind.

Some sights and sounds from the Aeroscreen's first on-track action at @IMS 👀 pic.twitter.com/nr3DgHjllV