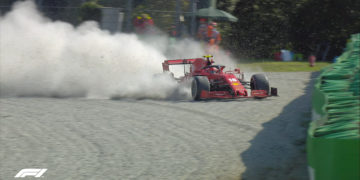 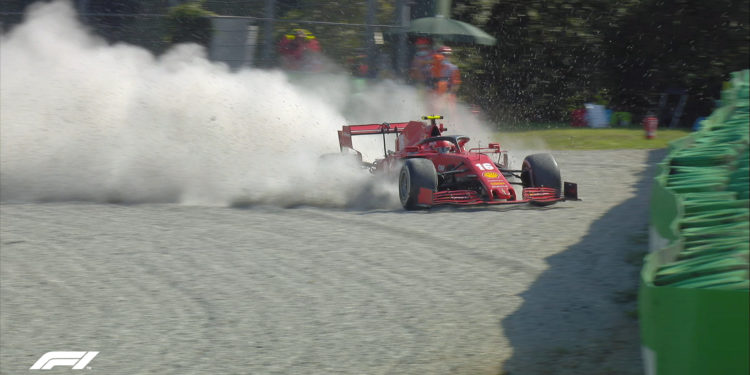 Today’s Italian Grand Prix was brought to a pause after 27 laps to fix the barriers after Ferrari’s Charles Leclerc crashed at the Parabolica.

The track had just return to green flag racing, following a Safety Car to clear Kevin Magnussen’s Haas which had lost power an pulled over near the pitlane entry, when Leclerc had a heavy impact at the final corner.

Leclerc had been the only remaining Ferrari in the race, after Sebastien Vettel retired after six laps with brake failure, but the Monegasque driver lost the rear of his car at the Parabolica and went straight into the tyre barrier. The Ferrari driver was unharmed after the impact though and was quick to get out of the car.

With the race restarting after a half hour pause, race leader Lewis Hamilton faces a 10 second stop-and-go penalty to serve after he pitted when the pit lane was closed during the first Safety Car period to allow marshals to push Magnussen’s stricken car into the pits. Alfa Romeo’s Antonio Giovinazzi also entered the pit lane during that period and will have to serve the same penalty.

The race resumed with Hamilton leading Lance Stroll and Pierre Gasly, while the two McLarens of Carlos Sainz and Lando Norris, who had been running second and third before the pit stops and safety cars, restarted in sixth and seventh.