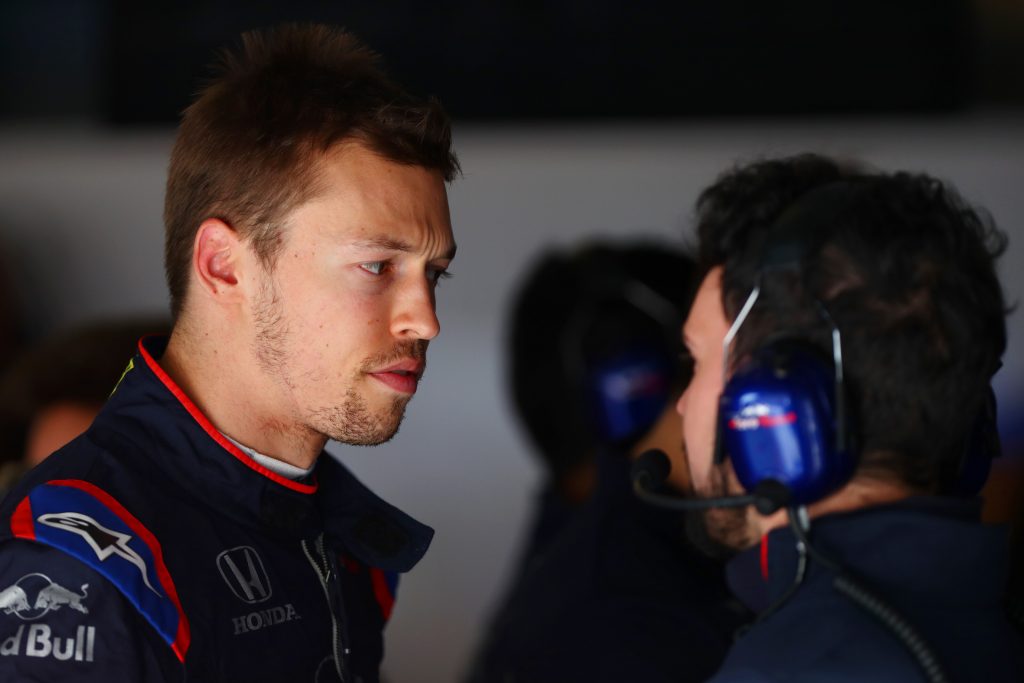 Kvyat disagreed with penalty and blame for Lap 1 collision

Kvyat disagreed with penalty and blame for Lap 1 collision

Chinese Grand Prix – Toro Rosso’s Daniil Kvyat was given a drive through penalty for his part in the first lap collision between himself and the two McLarens.

The Russian driver made heavy contact with both McLaren drivers Carlos Sainz and Lando Norris on the opening lap of the Chinese Grand Prix in Shanghai.

Racing out of Turn 4, Kvyat was attempting to outdrag Sainz when he suffered a little bit of rear wobble from putting down the power. While minor in itself, the woblle put him closer to Sainz’s car who himself was about to be squeezed by Norris, who was resuming the racing line after running a little wide through the corner. While Sainz saw the pincer movement coming and braked hard, it was too late. The Spaniard made contact with the left rear of Kvyat’s car, which threw the Russian into the side of Norris. All three picked up heavy damage that ruined their races.

After a quick investigation by the stewards, Kvyat was judged to be at fault for the collision. He was given a drive through penalty, as well as two penalty points on his FIA Superlicence.

“It was an unfortunate race today because after lap one the race was pretty much over.” said Kvyat, who retired in the closing stages of the race as the team decided to save engine mileage. “The pace we showed with a damaged car was very strong, so it’s disappointing not to be able to transform that into a good result as there was potential to finish inside the points today. I have seen the first lap incident with the two McLarens and I disagree with penalty. I think it was a typical lap one sandwich and these things can happen as we’re so close together. I will be meeting with the stewards to discuss it behind closed doors.”

His team boss Franz Tost agreed with his driver’s view of the incident, saying that Kvyat was the one who had been hit: “He was hit from behind which destabilised the car. At the same time, Norris returned to the track after going wide and hit Daniil’s front left-hand side of the car. In my opinion, Daniil couldn’t do anything different, nevertheless the Stewards decided to give him a drive through penalty. Later in the race when Daniil made his pit stop, we detected damage on the front nose probably caused by his lap one incident. We made another stop to change the front wing which put him a lap down, therefore we decided to retire the car to save engine mileage. This was disappointing because Daniil’s lap times were very competitive and I’m convinced he could have scored points today.”

Carlos Sainz, speaking to Sky, said he felt that Kvyat could have been more patient: “Another frustrating day. Impossible to avoid the Toro Rosso so another thing out of our control that ruined the race, and this time, unfortunately, involving our both cars.”