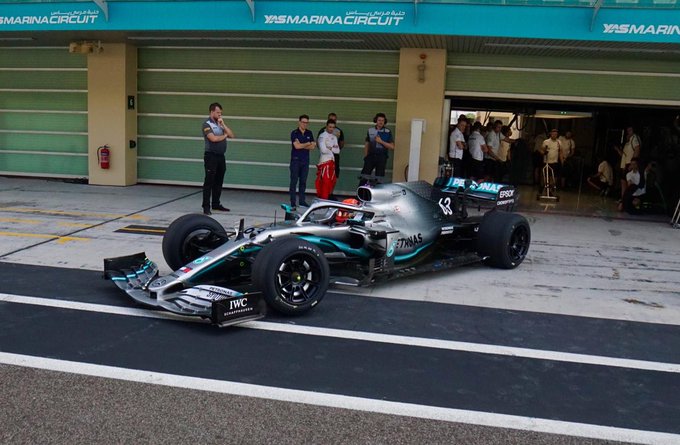 The final 18 inch tyre test of 2019 has finished, with Mercedes running a modified version of their W10 at Yas Marina.

Mercedes stayed behind for an extra couple of days after last week’s Abu Dhabi Grand Prix and collective Pirelli tyre testing with the 2020 13 inch tyre compounds.

With Mercedes having topped the final day of the ‘normal’ tyre tests with George Russell last Wednesday, the British driver was at the wheel of the W10 again on Monday as Mercedes run a mule version of the car that’s been modified to fit the new Pirelli 18 inch tyres. The mule car was Valtteri Bottas’ race chassis from the season finale.

Russell completed a total of 118 laps of Yas Marina, wrapping up Pirelli’s tyre development programme for the year.

This test also marks the end of the initial batch of 18 inch tyre tests conducted for Pirelli, with Renault and McLaren also carrying out some testing with modified cars between September and December.

The data gathered from these tests is being shared between all ten Formula 1 teams, meaning no advantage, in theory, can be gleaned for the teams who have carried out these initial solo tests.

During 2020, all the teams will be given the opportunity to carry out 18 inch tyre testing, provided that they can supply a mule car fit for purpose.