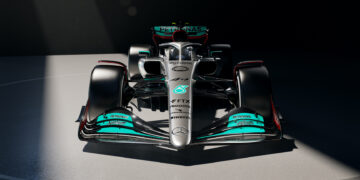 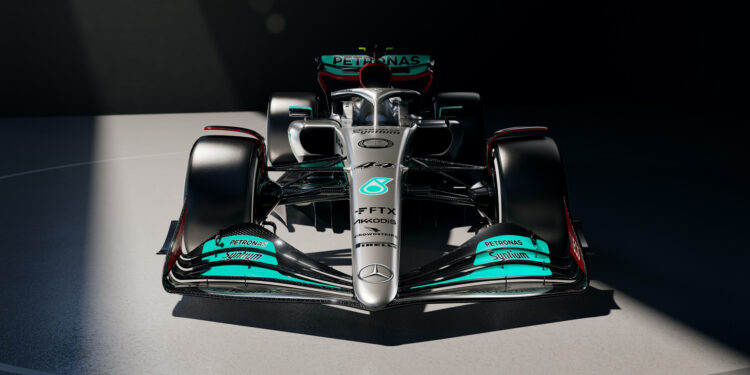 Mercedes became the latest team to reveal their car for the upcoming season after debuting the Mercedes-AMG F1 W13 E Performance.

After two seasons of black liveried Mercedes cars, the German marque has moved back to the traditional and iconic silver colouring for their 2022 silver arrows. With the new regulations, the teams have all had to create cars that are completely different to past years, with the team’s Technical Director Mike Elliot saying that the steering wheel is pretty much the only part that was carried over to the new car.

“A massive regulation change for this year in aerodynamics particularly,” Elliot said. “And that’s changed the complete shape of the car. In order to deliver this sort of shape it’s a huge amount of work, pretty much everything has to change, everything from the front of the car to the back. Pretty much only the steering wheel is carried over.

“To be able to get the shapes that we want in our aerodynamics we had to package everything as tightly as we can, we’ve had to work really closely to get the sort of tightness we’ve got in the bodywork. The car will continue to evolve but I think the real work is what’s under the skin.”

With everyone starting from zero Mercedes Team Principal, Toto Wolff, is hoping that the team have a competitive car but has faith that even if they don’t, the team will be able to pull things together.

“The hopes are first of all that we have a competitive car,” said Wolff. “It’s not a given with the new regulations. People are saying are we going to win another title and we don’t know whether we’re even in the hunt for another title. What I know is that this team has always been able, even if circumstances were difficult like the beginning of last year, to dig ourselves out of disadvantageous situations.

“And wherever this car is, I’m sure that we will be doing everything to be as competitive as we are. So my hope is that the car goes fast and that Lewis and George are happy with how it drives, that would be a good starting point.”

While the team’s goal is of course to continue their incredible run of eight constructor’s championships in a row, Wolff says that the team does not enter any season believing that they are guaranteed another title.

“There’s nothing from the previous year that will make you win the current championship, no credits to be taken but also no sense of entitlement. Every year we are sceptical whether we’ve done a good enough job and that’s the right mentality.”

After five years of Lewis Hamilton and Valtteri Bottas as teammates, the Finn has moved teams and so Mercedes have given George Russell the opportunity to compete with and against Hamilton.

Russell has been part of the Mercedes junior program, and even took over Hamilton’s car when the multiple world champion caught covid at the end of 2020, says that his familiarity with the team members and work process has made the switch quite smooth.

“The relationship is always built over time,” Russell said. “But I already knew so many of the people and obviously having worked with Lewis, or seen Lewis work when I was a junior driver sitting in the engineering briefings, that it will also feel quite natural going in there being teammates with him, racing alongside him.

“Lewis was a superhero to me. You see these incredible people and you don’t think they’re human and obviously now, grown up, having the opportunity to race alongside Lewis is a real privilege to me because I’ve got such a great opportunity to learn and see how the best does it.”

After narrowly missing out on a record-breaking eight world championship in the final race last season, there was much speculation over the winter break over whether Hamilton would continue in the sport or not. The British driver said that while he did need to take some time away to get over the disappointment, he loves his job and is grateful to continue.

“I never, ever said I was going to stop,” Hamilton said. “I love doing what I do and it’s such a privilege working with this large group of people. You really feel like you’re part of a family, part of a team working towards that common goal, there’s no feeling quite like it.

“It was obviously a difficult time for me and it was a time where I really needed to take a step back, focus on being present. I had my family all around me, creating great moments and eventually I got to a point where I decided I was going to be attacking again coming into another season.

The two are looking forward to getting back on track, seeing what changes the new regulations bring and understanding the W13.

“I think it looks incredible,” Russell enthused. “We’ve had an incredible livery with the black over the past couple of years but the silver back on track I think is going to look incredible.

“It’s always important not to set too many targets or too many goals because we don’t know what this is going to offer and you can’t go in with too many preconceived ideas. We know there’ll be drastic improvements, we hope, as the season progresses and we need to make sure we’re on the right side of that.”

Hamilton is also hoping the new season delivers as promised: “We’ll have no idea until we drive it but [closer racing] was something that everyone and all us drivers have always wanted. I really do hope this delivers what they say it’s going to deliver. This is just a first step and I’m sure it will evolve through the year but it’s probably one of the most exciting times.”