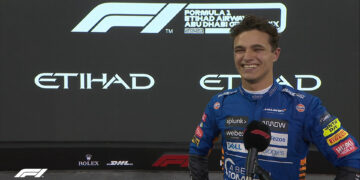 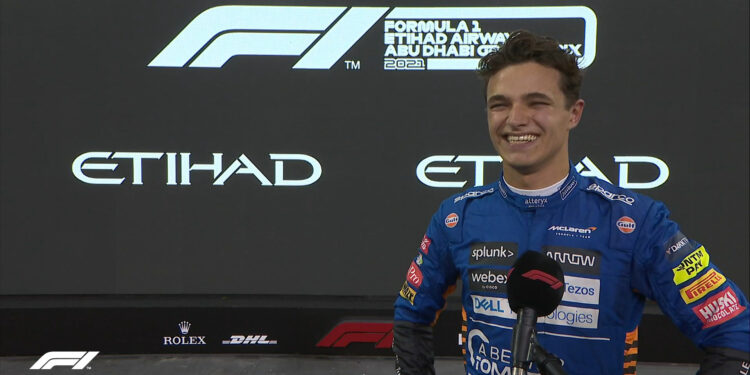 Abu Dhabi Grand Prix – Starting P3, Lando Norris is delighted to have qualified so well and is looking forward to watching the championship battle ahead.

Heading into qualifying Norris hadn’t been setting the times alight in the practices but says McLaren were confident that they’d be able to qualify well, but not even they had been expecting to be so high up the grid.

“Massively pleased,” Norris said in the press conference. “Very surprised to be here. Also very happy at the same time, obviously. I think we were confident all weekend that we could get to qualifying and put in a good performance but probably not to be this high up on the grid – so yeah, very happy, especially with my lap I did in Q3. It was definitely just putting it all together.”

The McLaren driver said that throughout qualifying he would drive different parts of the track well but wasn’t able to get a complete lap put together as he’d like, until the moment when it most counted.

“There were glimpses of it all the way through qualifying, every run I did I got one thing really good and messed up everywhere else. Then Q3 run one, I did the first half of the lap very good, and I was two tenths up on my best, but had a little lock-up into the chicane at turn 6 and lost a bit of time and then I had traffic with Perez.

“So there was that potential and it gave me some good confidence to go into the final run – if I just have a clean lap, if I just put it all together then I can pull off a good lap – and I did exactly that. Very happy with myself to perform when I needed to, and to be this high up the grid.”

While McLaren have lost the third place fight to Ferrari, Norris himself is still locked in battle with both Charles Leclerc and Carlos Sainz for P5 in the drivers’ championship where the trio are all within 8.5 points of each other. The British driver said that it was more the circuit suited his car as opposed to any big set up changes that had been made.

“Just layout. The car is still so sensitive to different types of corners and banked corners, not-banked corners and so on, so yeah. Qatar we were very competitive as well, we were quicker than Ferrari but apart from that, in the last bunch we’ve generally been a bit slower.

“So, to come here, to be ahead, I think it was very close between us, I was only something like five-hundredths ahead of Carlos. So it’s not like we’re miles quicker and are going to be comfortable tomorrow, but definitely just edging them out was definitely a good thing for myself but also a good thing for the team.”

Looking forward to the Grand Prix, Norris is thrilled to be able have such a great view of the Verstappen/Hamilton title battle.

“I think I’m in the best seat for tomorrow, so I’m very excited to see everything unfold, to see what goes on. I think it’s just a genuine pleasure to be in this position, to see everything that’s been going on this season between Max and Lewis and to watch the battles, to watch the racing because I have a lot of respect for them. Yeah, I’m very happy to be P3, not only because it’s a good position to start but because it gives me the prime position for the view tomorrow.”

Despite having the perfect viewpoint, the McLaren racer still has work of his own to deal with and believes that, with the mix of tyre choices, it will be an interesting race.

“I still need to focus on my own race,” Norris added. “I know the people who I’m really racing against. Some people are on the medium behind me, some are on the softs so, interesting race to come tomorrow, I think. We obviously have decent pace but the Ferraris are very close behind me and they’re going to be a big threat, so I look forward to it.”

Thanks to his stonking P3 lap, @LandoNorris will have an unbeatable view of the championship fight on Sunday 👀#AbuDhabiGP 🇦🇪 #F1 pic.twitter.com/sTplnYyEBw