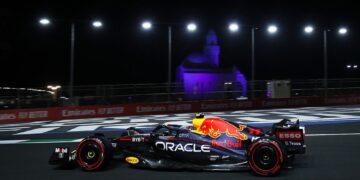 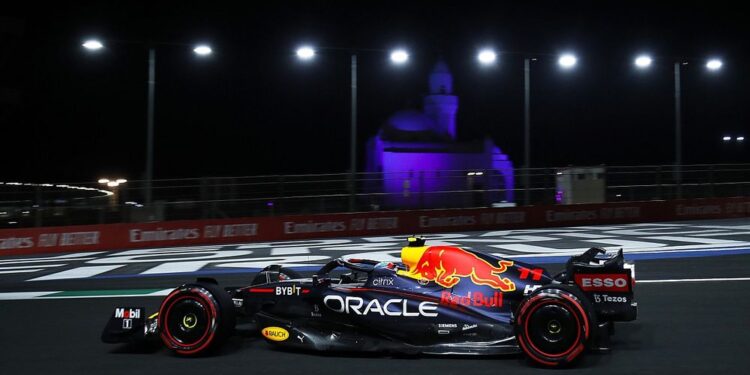 The Corniche International Circuit was lit up once again, dazzling spectacularly in the night sky as qualifying got underway.

There was a flurry of activity when the pit lane opened, with almost the entire field taking to the track in the opening minutes, only the Mercedes cars opted for medium tyres, the rest of the drivers on the softs.

The first lap of the session was set by Kevin Magnusssen , with a time of 1:30.425, closely followed by his teammate a tenth behind. The two McLaren’s slotted in behind Norris ahead of Ricciardo, also by a tenth.

Hamilton on the mediums suffered from oversteer, abandoning his lap. Teammate Russell went 5th fastest on his first attempt, the team continuing to be off the pace.

The Ferrari’s started their push laps, just as Nicholas Latifi brought out the first red flag of the session, burying his Williams into the barrier at at turn 13.  When Q1 restarted a queue formed in the pit lane as Red Bull, Ferrari, AlphaTauri, Alpine had yet to set a time.

Not a nice way to begin qualifying but looks like the driver is okay 🙏 pic.twitter.com/46zTOUj6k6

Yuki Tsunonda was called into the pits for an issue almost as soon as he emerged onto the circuit, the Japanese driver’s qualifying coming to an end early with a cooling issue.

With most drivers now on the track, Magnussen’s time at the top of the timesheets was over,  with Bottas initially replacing him before Verstappen then set a new fastest time of 1:29.330, laying down a benchmark for the chasing pack.

Ferrari responded to Verstappen by going 0.475s faster, with Carlos Saiz jumping to the top of the times.  The Spaniard hooked up a strong lap, leading from teammate Charles Leclerc.

Mercedes swapped their mediums for softs following the red flag, George Russell moving to 4th fastest, teammate Hamilton only managing 14th as the session drew to a close.

The final runs to avoid getting knocked out Q1, started with lap times tumbling. The order  constantly changing around as the track rubbered in. All drivers saw an improvement,  but in a shock elimination,  Lewis Hamilton found himself in 16th, unable to improve after two attempts to move up the order. It was the first time since Brazil 2017 that Hamilton has been knocked out in Q1.

Lance Stroll has knocked Lewis Hamilton OUT of Q1!! 🤯🤯

This is NOT how anyone would've written the script 😮 pic.twitter.com/1vwfCd7ZzU

Albon, Hulkenberg, Latifi and Tsunoda were the other drivers eliminated.

Mick Schumacher was the first out as Q2 got underway, with the benchmark fastest time awarded to Charles Leclerc, with a time of 1:28.883, followed by George Russell, 0.735s off Leclerc on used mediums, before Perez took P2 from Russell.

The midfield battle started to intensify,with McLaren, Haas, Alpine and AlphaTauri vying for a spoit in Q3, with Aston Martin struggling to find pace.

Bottas continued to impress in the Alfa Romeo, setting the 6th fastest time, with Mick Schumacher in 9th place for Haas as the session entered the final five minutes, before having a massive crash into the barriers, bringing out the red flag.

A red flag has been issued following Mick Schumacher's crash and they're working to clear the track of debris.

We understand that Mick is conscious, out of the car and currently on his way to the medical centre 🙏 pic.twitter.com/Dvxtpgux5I

There was a lengthy delay to the session, while Mick Schumacher’s car was recovered and barriers repaired. The German was lifted out of the car, but was able to fully communicate to the FIA doctors on the way to the Medical Center, before being transferred to hospital for a cautionary scan.  The Haas chassis split in two when being removed from the track, the team unlikely to repair the car ahead of the race tomorrow.

AlphaTauri used the red flag delay to repair Pierre Gasly’s floor, which had come loose. When the session restarted, Zhou, Ricciardo, Magnussen, Stroll and Ocon were in the drop zone, with a lengthy queue forming at the end of the pitlane to get out on track.

Magnussen was the first to set a lap time, the Haas suffering from porpoising on the main straight, backing off his lap after not improving initially.

When the chequered flag came out at the end of the session, the Alpine’s moved up the order as well as Pierre Gasly, knocking out Lando Norris. While Ricciardo was not able to improve, McLaren will take solace from a more competitive showing. Aston Martin’s Lance Stroll’s final effort only good enough for 14th, both Aston’s out before the top ten shootout.

Norris, Riccardo, Zhou, Mick Schumacher and Stroll were the drivers eliminated in Q2

Q3  got underway with Ferrari and Red Bull as the favourites for pole. The sole Mercedes of George Russell opted for only one run, remaining in the garage at the start of the session.

Verstappen opted for a second out lap to warm up his tyres, while Leclerc set the benchmark for the teams to beat,  immediately beaten by his teammate Carlos Sainz . Sainz gave Ferrari a provisional front row lockout,  with a time of 1:28.402, on used tyres. Leclerc was just 0.44s slower.

George Russell’s one timed lap saw him split the two Alpine’s moving to 5th, giving hope to Mercedes following a difficult qualifying for the team. Bottas once again showed consistent speed into 6th.

The final two minutes of the session saw the last gasp efforts of the drivers to get pole or move up the order, the track very busy.  Leclerc and Sainz were the first to show their speed, Leclerc taking provisional pole away from his teammate.

Perez then surprised the frontrunners, setting a blistering time of 1:28.200 to take his first ever pole position at the 215th attempt, denying Ferrari a front low lockout. Leclerc will join Perez on the front row, just 0.25s slower than the Red Bull.

OH MY WORD!! PEREZ GETS POLE FOR THE FIRST TIME IN HIS CAREER! 🤯🤯

What and ending of Q3 in Jeddah! 🙌 pic.twitter.com/5LK9adS1mS

Verstappen attempted to respond but could only manage 4th, 0.261s off his teammate. Ocon was best of the rest starting 5th despite needing to catch his Alpine after a moment.