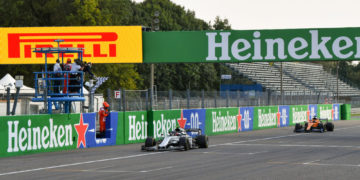 Pierre Gasly takes sensational win at Monza ahead of Sainz

Pierre Gasly takes sensational win at Monza ahead of Sainz 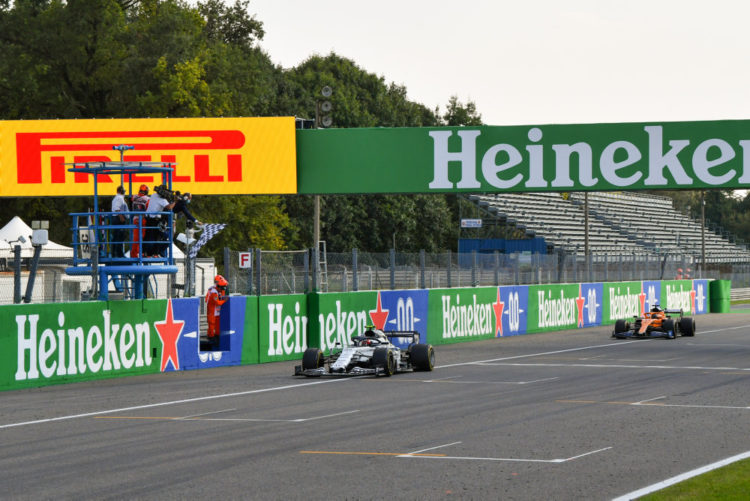 Click here for the complete results from the 2020 Italian Grand Prix.

Alpha Tauri’s Pierre Gasly has won the race at Monza, taking advantage of a mid-race penalty for Mercedes’ Lewis Hamilton to claim victory by a second over Carlos Sainz.

The first half of the race was a straightforward affair, with Lewis Hamilton holding the lead off the line while teammate Valtteri Bottas had a bad start to fall down to P6 on the opening lap. From there, Hamilton slowly but surely increased his lead to over 13 seconds by the midway point of the race.

Ferrari’s dismal season continued, with Sebastian Vettel suffering a brake failure on Lap 6. He retired to the pits, but it was a mechanical failure of the Ferrari power unit in Kevin Magnussen’s Haas that changed the complexion of the race. The pitlane was closed due to the position of the car, but Hamilton and Antonio Giovinazzi both dived into the pits while the rest of the drivers stayed out on track

The reason for this quickly became apparent as the stewards announced they would investigated both drivers for entering a closed pitlane.

As the race resumed, Charles Leclerc lost control of his Ferrari and crashed heavily at the Parabolica. He was taken to the Medical Centre for a checkup, and was released uninjured, but the crash resulted in a red flag period to clean up and fix the tyre barriers.

Under this red flag, it was confirmed that Hamilton and Giovinazzi would both take a ten second stop & go penalty for entering the closed pitlane.

Under the red flag rules, drivers are able to change tyres without making a pitstop. This meant that while Hamilton led on track for the opening lap of the restart, the lead was essentially held by Lance Stroll as the Canadian driver hadn’t pitted in the opening half of the race.

However, with the restart taking the form of a standing start, Stroll had a slow getaway and it was Pierre Gasly who sliced his way past into a net lead as Hamilton peeled away to take his penalty. The Mercedes driver fell to the back of the field as a result, while Gasly led away from Alfa Romeo’s Kimi Raikkonen – the Finn having gambled on the Soft tyre for the restart.

Raikkonen’s tyres didn’t last particularly long, with Carlos Sainz moving up to P2 and starting to set about closing the gap. This he managed, closing to just 0.4 behind Gasly at the chequered flag. The Alpha Tauri driver controlled the gap just enough to cross the line in front, with Sainz settling for a disappointedly elated P2. Lance Stroll came home in P3.

Lando Norris came home in P4 for McLaren, while Valtteri Bottas came home a subdued P5 after a largely anonymous afternoon after fluffing the initial start.

Daniel Ricciardo came home in P6 for Renault, while Lewis Hamilton recovered to finish in P7 after a strong recovery drive. He finished just 10 seconds behind Bottas despite his stop/go penalty.

Nicholas Latifi took P11 for Williams in their last race before the new owners take over the running of the team, with the Canadian driver making an emotional tribute to his former bosses over team radio on the cooldown lap.

Alex Albon claimed P15 for Red Bull Racing after a scrappy race, while Antonio Giovinazzi was the last classified runner in P16.

Along with the two Ferrari retirements, Kevin Magnussen and Max Verstappen were the other cars not to finish with both suffering power unit issues.