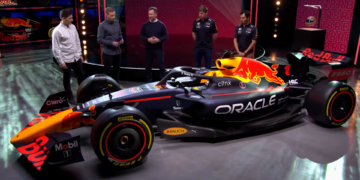 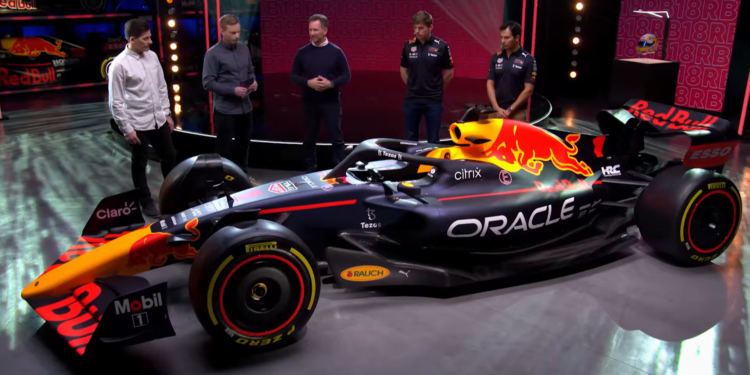 At their car launch this afternoon Red Bull revealed their livery and that they will be competing as Oracle Red Bull Racing this season.

After spending the last year as a team partner, US tech company, Oracle will now step up to be the team’s title sponsor, assisting in strategy simulation and will add new machine-learning and AI projects to aid the team.

The 2022 car, the RB18, and the usual Red Bull blue, red and yellow livery were also debuted during the launch but is unlikely to look as it did today for long as Team Principal, Christian Horner, admitted that with the new regulations the car will undoubtedly change after testing and through the season.

“Because it’s new regulations [the RB18 is] going to evolve very, very quickly,” Horner said. “I think by the time we get to the first race the car’s not going to look very much like this. And I think the evolution will be very, very quick as we progress through the season.”

“With a complete new set of regulations it’s going to be all about the development – how quickly the teams get on top of this set of new regulations. The biggest regulation change for probably 30 to 40 years in F1, so development is going to be thick and fast and with the cost-cap, it’s got to be efficient.

“The whole philosophy of the regulations has altered from last year so that means every single component is brand new this year. With it being a ground effect car, with it being designed to make overtaking hopefully easier, and the cars easier to follow each other, that’s changed the whole philosophy of how we design these cars. So it’s a steep learning curve, it’s steep for everyone and it’s a race of development between [the] first race and the last race.”

Red Bull will have an unchanged driver line-up of Max Verstappen and Sergio Perez, and Horner is very happy with how the two worked together in their first season as teammates.

“[The drivers’ partnership] grew throughout last year,” Horner continued. “And you saw the culmination of that in the teamwork in the latter races, particularly in Abu Dhabi. The most important thing was that we really worked strongly as a team and to see the two drivers working and supporting each other.

“Checo [Perez] in his first year winning that race in Azerbaijan, and other podiums, he’s going to be stronger and taking a step up I’m sure in 2022. Max was just phenomenal last year, an outstanding season for him. He dominated the amount of laps led, had ten Grand Prix victories, and of course the World Championship, so his confidence is going to be sky high and looking to build on those performances.”

Verstappen will be ditching his normal race number, 33, in favour of the World Champion’s number 1 this season, and said he’s looking forward to discovering how the new car behaves. Though he has noticed that the new tyres, 18 inch now compared to the 13 inch previously used, will make precision more difficult as they block more of the driver’s view than the previous ones did.

“I haven’t really driven [the simulator] too much,” said Verstappen. “But the biggest thing is the view in the cockpit with these big tyres. To hit an apex in some tight corners is a bit more difficult.

“The driving feels like the car has a bit less grip but you will get used to that, that’s why we have the practice days so you can get used to the sliding and locking and stuff like that. I think it should be fine, just getting a bit more used to the view in the cockpit. The tyres are bigger, of course we are running bigger wheels but also the tyres increased so that will make it a little bit more tricky.

“A lot is unknown about the car, what is important is you prepare yourself the best way possible physically but in terms of the car, you don’t know, so that’s why I’m very curious to see how the car is behaving on track. I’m really looking forward to that first moment when you drive out of the pit lane and you do your first few laps.”

Perez meanwhile said that his debut year with the team was “intense” with them being in the title fight from the off but he enjoyed the challenge and is looking forward to seeing how the new regulations change racing this season.

“[2021] was an intense season,” Perez said. “Getting up to speed with a new team, especially the team that was fighting for the championship since race one, so really no time for any adaptation it was just straight into it. It was really challenging but very enjoyable, we gave it all until the final lap of the season.

“We have a massive change of regulations with the tyres as well, they’re going to be different, the racing apparently we’re going to be able to follow closely. So there’s a lot of things that we have to learn.

“I really hope that for us as drivers, we are able to compete more during the race, to be able to follow each other a lot closer, and for the fans that we can give them great entertainment, great racing, and that would be really nice.”