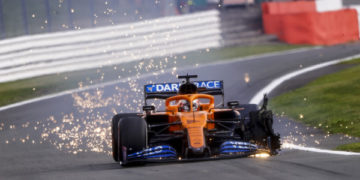 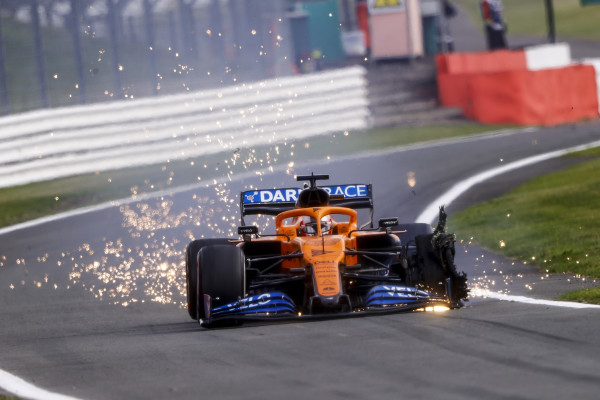 British Grand Prix – McLaren’s Carlos Sainz was left speechless and frustrated after his left-front tyre blew on the penultimate lap of the race.

The Spaniard was on course to finish 4th after a strong race nipping at the heels of Ferrari’s Charles Leclerc – who will be his teammate at Ferrari next season.

“I’m a bit lost for words to be honest,” said the 25-year-old. “I think the images spoke for themselves. It’s a very frustrating end to an otherwise very strong race.

“I had a great start gaining a couple of positions and solid pace throughout the whole race, managing the tyres and the gap to the cars behind.

“Everything was working well, we were on for a very strong P4 and 12 points,  but then the tyre failed and I had to box on the last lap. Very disappointing, frustrating and unfortunate. Nothing we could do about it though.

With Mercedes’ Valtteri Bottas suffering a puncture as well and being forced to pit, Sainz was on course to leap from 5th to 4th – however the puncture caused him to pit for repairs too.

Sainz is positive about the pace of the MCL35 and hopes for better luck at the 70th Anniversary Grand Prix at Silverstone next week.

“I’ve lost some important points in these first four races, so I really look forward to this run of bad luck turning around.

“With a shorter championship, losing these points hurts more than normal, but we need to carry on.”

“On the positive side, the car felt good on track and the boys did good pit-stops for the team – that’s why I also feel so bad for them.

“Tomorrow, we’ll switch our focus to the second round here at Silverstone next week to try to capitalise on our good pace.”

McLaren Team Principal Andreas Seidl sympathised with Sainz’s bad luck but is pleased with the way his drivers and team have performed so far this season – with both Lando Norris and Carlos Sainz finishing every race.

“Right now, I feel sorry for Carlos – he had very bad luck after a strong drive. To lose many good points one lap before the end with a puncture leaves the whole team very disappointed.

“Nevertheless, this is racing, and this is what happens. Both drivers have again put in good performances, again we had a competitive car and we still scored some important points in the Constructors’ Championship with Lando [Norris] finishing in P5.

“The crew did great work with three very good pit-stops, and the strategy team made all the right calls in pressured situations when the Safety Car came out.”