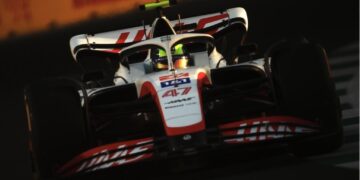 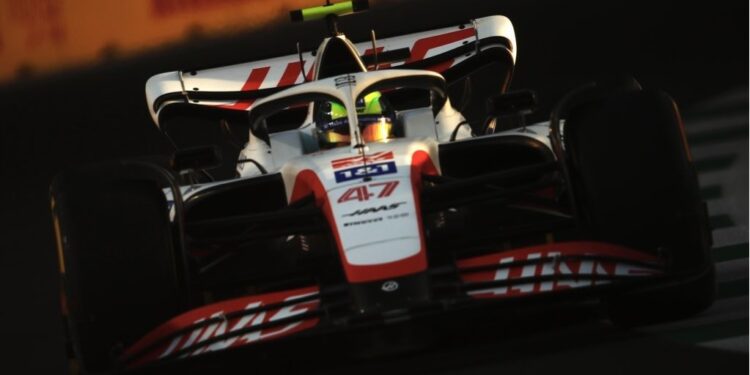 Saudi Arabian Grand Prix – As a result of Mick Schumacher’s crash, Haas have decided that they will only race with one car in tomorrow’s Grand Prix.

With five minutes left on the clock for Q2, Mick Schumacher, who was sitting P9 on the timesheets, was on another fast lap when he lost the car at turn 10, hitting the wall heavily and rebounding into another before the car finally slid to a halt further down the track, a trail of debris behind it.

While the red flags were immediately flown, it took a while before there was any news of Schumacher’s condition as the car’s radio was damaged in the impact so he couldn’t communicate with his team.

“We just lost all the data immediately on impact,” Haas Team Principal, Guenther Steiner, told Sky F1. “We had no contact with him and no data anymore, it just cut everything off in the impact.”

The medical team extracted the young German from the car and brought him to the circuit Medical Centre where they found no physical injuries but brought him by helicopter to hospital for precautionary check-ups.

“He has no injuries which you can see,” Steiner told Sky F1. ”They just wanted to check on him and do some scans to see that there is no damage from the impact, from the forces.

“It seems like he just got on the kerb and then just lost the car, double wheelspin. I think our car is good and maybe he just tried a little bit too hard. Here if you make an error there’s no run-off. It’s walls.”

Hi everyone, I just wanted to say that I’m ok🙏
Thank you for the kind messages.
The car felt great @haasf1team, we’ll come back stronger❤️ pic.twitter.com/Mwpy0767kN

At that point, without having talked to Schumacher or seen the car themselves, Haas hadn’t made any decision on whether they would be fielding both of their cars in the Grand Prix.

“We need to see after the scans how he is doing,” Steiner said during qualifying. “How the car is and then we decide what we do tomorrow. At some stage it’s maybe better not to start but I don’t know yet, I don’t want to anticipate that we don’t start but we are considering everything for tomorrow.

“We have to see the car, which position we are in with spare parts because the car, there will be nothing left. Everything needs to go back to be checked anyway after an impact like this so you need to build a complete new car.”

Just over an hour after qualifying finished Haas announced that Schumacher’s race weekend would not be continuing and that Kevin Magnussen, who had qualified in P10, would be their only car in the Grand Prix.

“A very eventful day for us,” Steiner said in the team’s post-qualifying press release. “The best thing is that Mick has apparently no injuries, he’s in the hospital right now and being evaluated by the doctors, so he is in good hands at the moment. There is a possibility that he’ll have to stay for observation overnight at the hospital.

“Based on these facts and where we are, we have decided not to field his car tomorrow. Kevin, having not done a lot of practice yesterday, I think he did a fantastic job today getting into Q3. His last run was not as planned but I think that was down to not having enough time on track. We’re still happy with Q3 and P10 tomorrow.”

Magnussen himself was relieved and impressed that the level of safety allowed his teammate to walk away from such a big crash.

“I’ve heard Mick is uninjured,” Magnussen said. “Which is good and incredible when you see the crash that he had, but the safety is so good with these cars with the fact that you can walk away from a crash like that, it’s impressive. I think he was having a great qualifying session up until that point and he was up for a good result, so he’ll just need to come back and get on the horse and bounce back.

The Dane was disappointed with his performance in qualifying, feeling that the car was capable of a much higher result that P10, but the combination of used tyres and his neck muscles not being able to hold up, are what prevented him from delivering that potential.

“We have to be happy with Q3,” he continued. “But the car was better than P10, I didn’t get the most out of it. Honestly my neck just completely broke in Q3 – suddenly it snapped, and I couldn’t hold it. I wasn’t driving well, I think maybe there was a P5 in the car, there’s only half a second up to P5 and my best lap in Q3 was on used tyres – and not a great lap as I said. The team had a P5 in it, but I didn’t.”

Mick Schumacher will miss the Saudi Arabian GP after a huge accident in qualifying.

That Mick is physically well after the crash is another reminder of the strength and safety of modern F1 cars for which we are incredibly thankful#SaudiArabianGP #F1 pic.twitter.com/qhLcw0elb7