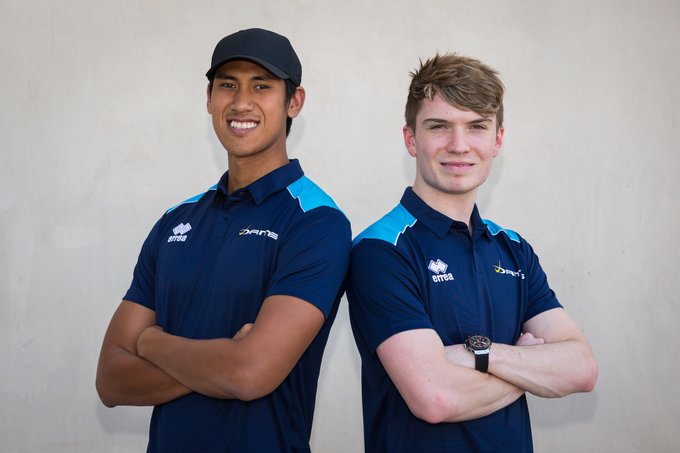 Dan Ticktum and Sean Gelael will drive for the DAMS Formula 2 team in 2020, with the announcement made on Wednesday.

DAMS have turned to Dan Ticktum, formerly part of the Red Bull Junior programme, as well as Sean Gelael, to drive their cars next season.

Gelael has been signed after racing with Prema in 2018, where he partnered with Mick Schumacher. His best result over the season was a P6 finish in the Azerbaijan feature race. He has also been working with the Toro Rosso Formula 1 team as a test driver, and is testing with the Red Bull junior team this week at the Abu Dhabi tyre test.

Dan Ticktum’s contentious signing marks a return to a prominent position in motorsport after a tough 2019. After finishing runner-up to Mick Schumacher in the 2018 Formula 3 Euroseries, the double Macau Grand Prix winner left to join Super Formula with the backing of Red Bull. He was dropped entirely from their programme before the end of the campaign, following poor results.

Ticktum returns to DAMS after racing with them sporadically in GP3 in 2017, and is now committed to a full season of battling on the periphery of Formula 1 after looking as though that opportunity had slipped away from him. Ticktum’s history is regarded as a black mark against him, as he was formally banned from motorsport for two years back in 2015. Racing for Fortec in MSA Formula at Silverstone, Ticktum overtook several cars under the Safety Car and crashed intentionally into his rival Ricky Collard. However, as his racing experience and personal maturity increased over the intervening years, it’s been a case of climbing back towards redemption since returning from his ban.

“It’s an honour to be joining DAMS in Formula 2 for the 2020 season.” said Ticktum. “Having competed with them in GP3 in 2017, I’m looking forward to being back with the team and continuing to build on those successes.  By winning the teams’ title this year, DAMS has again shown that they are one of the best outfits out there. François and his team have a reputation in the Formula 1 paddock for producing top drivers as well as for offering them the best support to get them to F1 – I can’t wait to get started later this week in Abu Dhabi.”

Sean Gelael said: “I’m really humbled that DAMS has accepted me as one of their drivers, especially after the year they’ve had winning the teams’ championship and with the tough driver market there is. Obviously, we’ll be looking to repeat that next season although it’s going to be challenging. We have big changes with the introduction of the 18-inch wheels, but we’ve got a great bunch of people that believe in their drivers.”

Both drivers will debut for DAMS this week, as they take part in the collective Formula 2 tests in Abu Dhabi from the 5th to the 7th of December.