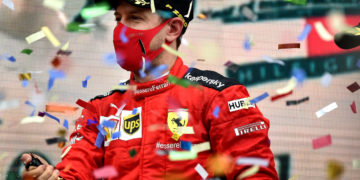 Vettel: changing to slicks ‘would’ve been a chance to win’

Vettel: changing to slicks ‘would’ve been a chance to win’ 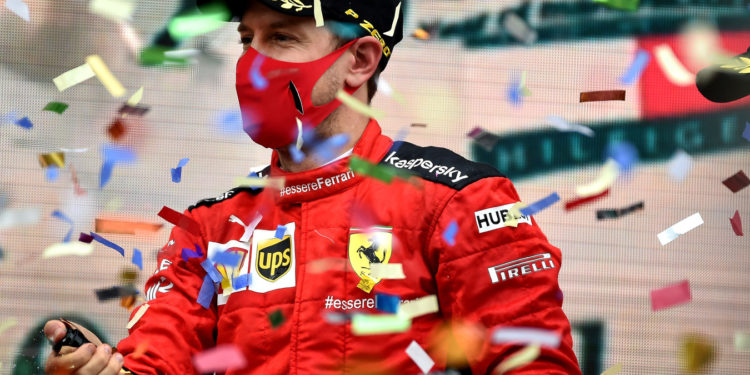 Turkish Grand Prix – Sebastian Vettel believes that swapping to slick tyres could have won him the race but is ultimately happy with his first podium of the season.

“Twenty laps to go I was thinking about dries [slick tyres],” said Vettel. “Because the circuit was constant, the tyres anyway were worn so ultimately we had slicks. I think it’s just a matter of nobody dared to put them on and there was some rain forecast in the end which didn’t come. I would’ve really liked to put them on because I think that would’ve been a chance to win but equally happy with third.”

The Ferrari driver had a very impressive first lap where he managed to move up from his eleventh place start to be third by the end of the opening lap.

“[The race] was quite intense, quite long, but good fun. I had a really good opening lap and I think I found myself already in P4. I was quite happy on the extremes [wet tyres] then we switched to inters, it was a bit more difficult in the beginning and only towards the end I started to find the pace again.”

Vettel didn’t seem to be able to get the intermediate tyres working as well as his teammate did and so ended up behind him towards the later stages. However, patience and experience paid off and he was able to take advantage of a mistake from Leclerc and secure his first podium since Mexico 2019.

“It was very intense in the last lap so yeah, a bit of a surprise to get to snatch the podium in the end but certainly very happy. I think it was a really enjoyable race in very tricky conditions.”

“I saw that Charles [Leclerc] was quite close to Sergio [Perez] and I heard that Sergio is struggling with his tyres so in the laps before I was already chasing them down and then I could see them fight and as soon as I saw Charles locking up obviously I saw that there’s an opportunity for me. It was very close as well with Sergio, I think he had nothing left on his tyres.”

“There are some races that are special, where anything can happen. I think today’s race confirmed that I have a special relationship with Istanbul Park. One could say my Formula 1 career began here and here again, in what has so far definitely been a difficult season, I have managed to finish on the podium for the first time.”

After the race Vettel was the first to congratulate Lewis Hamilton on his record-equalling 7th World Championship.