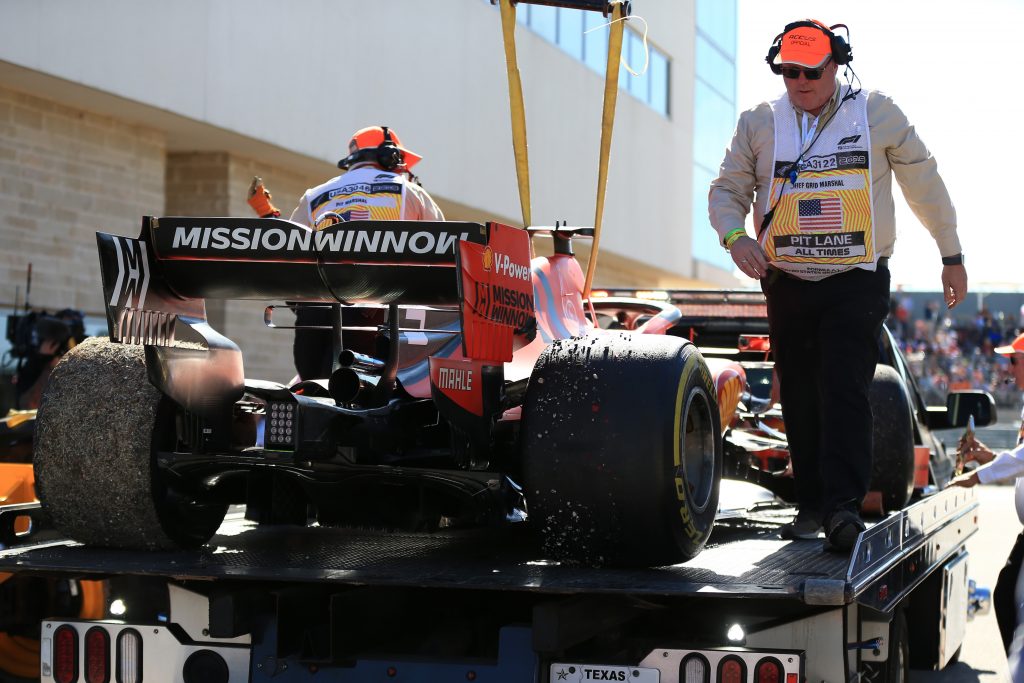 United States Grand Prix – Ferrari’s Sebastian Vettel had a calamitous race at the Circuit of the Americas, retiring early due to a suspension failure.

Having started from the front row of the grid for the US Grand Prix at the Circuit of the Americas, Sebastian Vettel’s race came to an end on Lap 7.

The German driver had a terrible start to the race, being jumped off the line by third placed Max Verstappen. Three corners later, Lewis Hamilton managed to pass Vettel around the outside to relegate the Ferrari down to P4.

Immediately, Vettel fell into the clutches of his teammate Charles Leclerc. While he tried to hang on down the back straight, Leclerc resisted to shuffle Vettel down to P5. Before the end of the lap, McLaren’s Lando Norris also got past the Ferrari, while Renault’s Daniel Ricciardo then moved him down to P7 down the main straight at the conclusion of the opening lap.

Losing five positions in a single lap was a bad start to the race and it didn’t get any better from there. He radioed in to say he had ‘understeer like crazy’ and had made no progress forward by Lap 7. Driving through Turn 9, his right rear suspension failed in dramatic fashion and he was forced to pull off the track after managing to slow his car down and stop safely.

Bewildered by his seven lap long race, Vettel said that reviewing the footage with his team in the garage hadn’t shed any light on what happened: “I had no contact but I wanted to make sure. We’ve just gone through the footage again, but I just had really really poor grip struggling to get the tyres to work.”

“I had that poor feeling with the car straight away and it took some laps to get the tyres to work.”

“From there, I was just about settling into a rhythm. I still had issues with right hand corners mostly, but obviously had to get used to it, and then the suspension failed. I had no idea what it was.

With Charles Leclerc warned over the radio to avoid the kerbing at Turns 8 and 9, Vettel was asked whether Ferrari had spotted something on the data. Vettel said: “[It’s] just precaution. We’ve had enough running the whole weekend without any trouble so don’t know what happened.”