To celebrate their end of season for this year, Mercedes’ Lewis Hamilton and Yamaha’s Valentino Rossi travelled to the Circuit Ricardo Tormo in Valencia for a day of excitement as they got to grips with each other’s respective machinery.

While Lewis Hamilton’s World Championship winning W08 was at the circuit, it was Valentino Rossi who took the wheel of the Mercedes to sample its performance. Rossi is no stranger to testing Formula 1 machinery, having taken part in several tests with Ferrari at Fiorano over the years. However, for Lewis Hamilton, it was a day of firsts as he clambered aboard Rossi’s 2019 Moto GP Yamaha YZR-M1.

“It’s so awesome to see a legend get into the car.” said Hamilton about Rossi’s go in the W08. “I’m excited for him for the discovery, you know? Discovering the car for the first time. It reminds me of the first time I drove a Formula 1 car. Even though I know he’s driven one before, when you see all the people around you, it’s a different animal you know?”

With the ride swap between Valentino Rossi and Lewis Hamilton organised through mutual team sponsor Monster Energy, the pair spent the day laughing, joking and comparing notes about the others machine, and it made quite the impressive sight to see the two racing giants completely out of their comfort zone as they got to grips with their new steeds.

“I was already a big fan of Lewis before, but now even more.” said a beaming Valentino Rossi after his spin in the W08. “We had a fantastic day, where the two top classes of motorsports not only met but worked together.”

“Trying the W08 was a spectacular opportunity for me. I have tried an F1 car before, but much has changed since then. Sincerely, I was impressed with the car and its handling, as well as with the Mercedes-AMG Petronas Motorsport team, who were great to work with. They were very welcoming and made it easy for me to get familiar with the car.”

“At first you get an amazing sensation of speed. The G-forces were not so bad, but it takes some getting used to. Once I got into the rhythm I could really push. It was a great pleasure. I felt like a real F1 driver for a day. I didn’t want the day to end!”

“I also rode the YZR-M1 on track with Lewis. It was a proud moment for the team to share our passion with him. Technically, Valencia is a hard track, and it was windy, so at one point I thought it could be difficult for Lewis, but he was brilliant on the bike and his position on the M1 was great. I really enjoyed sharing this experience with him, and I think he had loads of fun too, demonstrated by how reluctant he was to stop riding! I sincerely hope we will get to have many more experiences like this in the future.”

Check out the videos below. 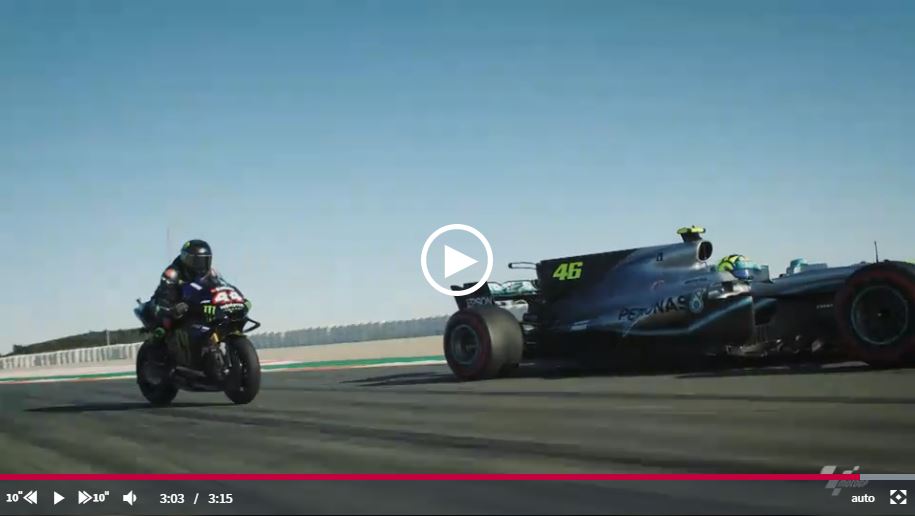 Check out Fernando Alonso’s ride swap with NASCAR’s Jimmie Johnson in Bahrain at the end of 2018!