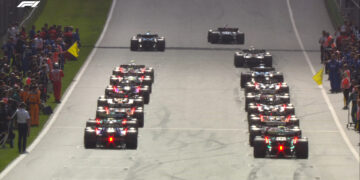 Austrian Grand Prix – The Stewards have cleared each of the seven drivers investigated over formation lap messages of wrongdoing.

The seven drivers – Mick Schumacher, Daniel Ricciardo, George Russell, Esteban Ocon, Sergio Perez, Lance Stroll and Sebastian Vettel – were alleged to have received messages during the second formation lap, and in doing so, breached Article 33.1 of the FIA Formula One Sporting Regulations, which reads: “the driver must drive the car alone and unaided”.

However, following an investigation where the Stewards met with representatives from each of the teams and listened to the audio of the messages, it was decided that there would be no further action as none of the messages did actually breach the rule.

The decision read: “The Stewards received a report from the Race Director and used audio evidence. The Stewards met with the team managers concerned and determined that the messages that were under investigation were permitted.”

Vettel, who was also investigated for leaving the Friday Drivers’ Meeting early after becoming frustrated with how it was going, was handed a suspended fine for that.