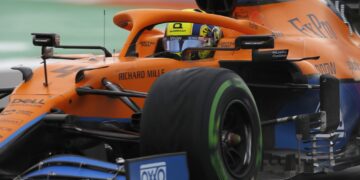 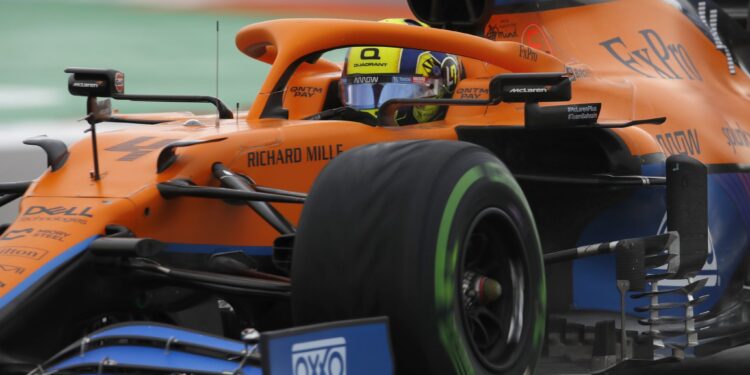 The Briton’s time of 1:41.993 was nearly half a second faster than ex-teammate and Ferrari driver Carlos Sainz. Mercedes-bound George Russell set a surprise third place in the Williams after being the first to switch to slick tyres.

Lewis Hamilton could only manage fourth after late drama when he crashed his Mercedes entering the pitlane. The seven-time world champion only had wing damage and it needed to be replaced. When Hamilton left the pits, he was unable to best his intermediate time.

After a deluge of rain on Friday evening and into Saturday morning, the track was wet for the start of qualifying. A break in the weather allowed the qualifying session to be run – good news considering Free Practice Three was cancelled due to the conditions.

In Q1, the teams elected to fit intermediate tyres and circulate the Sochi Autodrom to take advantage of the evolution of a drying track. Red Bull’s Max Verstappen, who will take an engine penalty for this race, didn’t set a time and will start at the back of the grid.

Further rain didn’t arrive, but low ambient temperatures meant that the track didn’t fully clear. However a drying line allowed the times to continue to tumble, and in Q3 Russell was the first to try the soft slick tyres.

McLaren teammate Daniel Ricciardo set the fifth fastest time ahead of Fernando Alonso in the Alpine. Valtteri Bottas, who had been the class of the field on Friday, will start down in seventh place.

Aston Martin’s Lance Stroll out-qualified his teammate Sebastian Vettel and will start in eighth place, with the German down in 11th.

Sergio Perez rounded out a disappointing day for Red Bull who qualified in ninth place. Esteban Ocon rounded out the top ten for Alpine.

AlphaTauri’s Pierre Gasly, who was left furious at the end of Q2 feeling he was impeded by a Williams on his last run, starts down in 12th. Teammate Yuki Tsunoda will start alongside him in 13th.

Alfa Romeo’s Kimi Raikkonen starts his last Russian Grand Prix in 16th place ahead of the Haas of Mick Schumacher. Teammate Antonio Giovinazzi, who had a spin early in Q1 qualified in 19th, with Nikita Mazeping in the other Haas the last of the the qualifiers.

Ferrari’s Charles Leclerc, who is another driver who will take an engine penalty for this weekend, got through to Q2, but took no further part in the session.

Williams’ Nicholas Latifi didn’t set a time and will receive a penalty for changing his powerunit after the team discovered a hydraulic leak overnight.