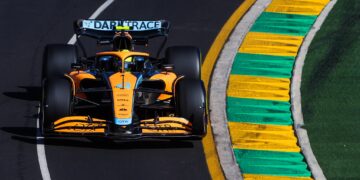 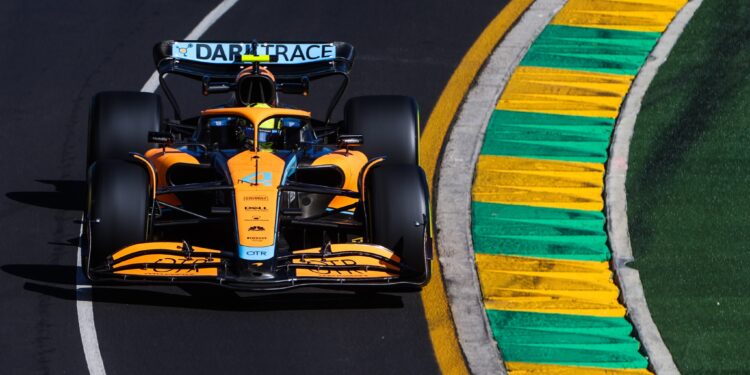 Australian Grand Prix – Lando Norris put McLaren on the top of the times in the final practice after the session ended early due to red flags.

The final practice session ahead of qualifying started with the news that the record fourth DRS zone, on the new straight between turns 8 and 9, has been removed and so the track will be back to just having three for the remainder of the weekend. That meant that the first DRS detection was moved from before turn 7 to before turn 9.

It was a slow start to the session with only a handful of drivers venturing out onto the track in the opening few minutes. It was only after seven minutes of the session that the first time was posted, Norris having a completely clear circuit to put in his 1:21.247 on the soft compound.

The Red Bulls made their first appearance after that and their opening attempts on the mediums saw first Max Verstappen and then Sergio Perez shave a bit of time off the McLaren’s time to have a 1:21.024 as the best so far.

It was only after the first quarter of the session had passed that the track started to get busier and the laptimes moved into the 1:20s and it was Alpine’s Fernando Alonso who held the top when first Lewis Hamilton brushed the wall after running through the turn 10 gravel trap bringing out a yellow flag, and then almost immediately Sebastian Vettel wasn’t as lucky when he did the same, his Aston Martin hitting the wall heavily at the same point which brought out the red flag.

That meant Vettel was back on a scooter again, this time though he was the passenger as a marshal couriered him back to the pitlane via the service roads, and the session was back to green after a ten minute hiatus with just less than half an hour of the practice to go.

As the session resumed, Verstappen was on a quick lap but ended up spinning on the grass at the exit of the penultimate corner. The Red Bull driver told his team that it was hard to feel the balance of the car. While the defending champion was not having the easiest start to the day, at the top of the times it was his teammate, Perez, who was trading fastest times on soft tyres with Alonso.

In a complete change of fortunes from what has been seen so far this season, while Verstappen continued to feel unhappy with his car, dealing with understeer in the latter stages, Norris was back to the top of the times just inside the final ten minutes, with a 1:19.117.

With less than five minutes left, and the red flags made another appearance as the sole remaining Aston Martin ended up in the wall at turn 11. Lance Stroll had a much slower trip through the gravel than Vettel but ended up breaking his front left, the same as his teammate and leaving the team with a lot of work to do before qualifying.

The session did not resume and that left McLaren on top though it wasn’t the ideal end as Norris was told “Please bail. Avoid full throttle” as the practice ended.

Charles Leclerc was P2, 0.132 seconds off, while Perez and Alonso were P3 and P4. The second Ferrari was P5, Sainz having put in a 1:1.419, and home favourite, Daniel Ricciardo, was P6 just over half a second of his teammate’s time.

Verstappen ended P7 with a 1:19.809 ahead of his rival from last season, Lewis Hamilton. Valtteri Bottas was P8 for Alfa Romeo, 0.891 seconds off the pace while Yuki Tsunoda was the best of the AlphaTauri drivers in P10.