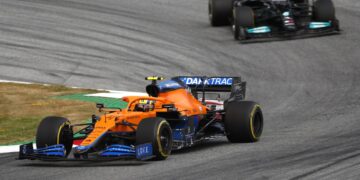 Norris frustrated at penalty: I didn’t even push Perez

Norris frustrated at penalty: I didn’t even push Perez 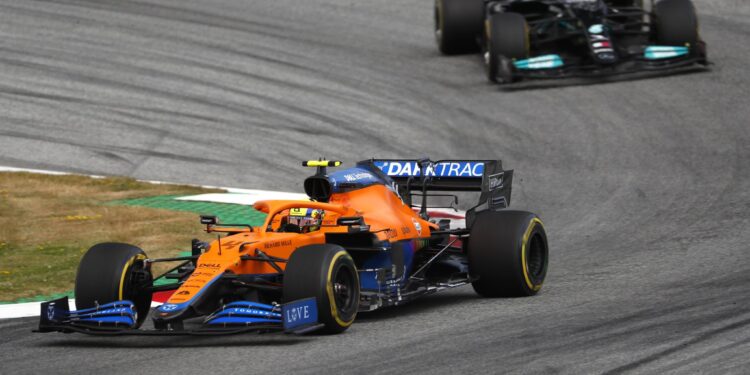 Austrian Grand Prix – McLaren’s Lando Norris was disappointed to miss out on second place after picking up a time penalty for an incident with Red Bull’s Sergio Perez.

Norris, who ended up taking third, was trying to defend from Perez after the Safety Car restart early in the race. The Mexican made a move around the outside of Turn 4 but ran out of road and skidded across the gravel, dropping down to tenth.

The pair were immediately put under investigation by the stewards with Norris picking up a five second time penalty for forcing Perez off the track.

The 21-year-old had mixed emotions after the race, who picks up his fourth career podium.

“It was a lot of fun, it was exciting but I’m disappointed because we should have been second place,” said Norris after the race.

“I thought that Lap 1 was just racing really, he tried to go around the outside which is a bit stupid and he ran off the track himself.

“I didn’t even push him so I don’t know, I’m frustrated, but I’m also happy with the P3. We had very good pace.”

Norris had strong pace on Saturday and managed to out-qualify both Mercedes cars and Red Bull’s Sergio Perez. The McLaren driver has praised his teams’ progress being able to race amongst the front runners.

“I think we had good pace,” said Norris. “I could keep up with them a lot, even in the dirty air but not enough to get into the DRS. As soon as I got close to one second I started struggling too much. Shoulda-coulda-woulda in the end.

“It’s nice to know that we can be there and we can race them, probably the first time in many years of actually racing a Mercedes and the Red Bulls but hopefully we can keep it up next time.”