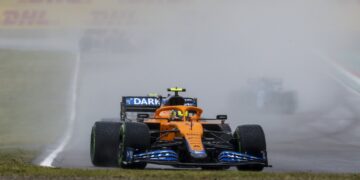 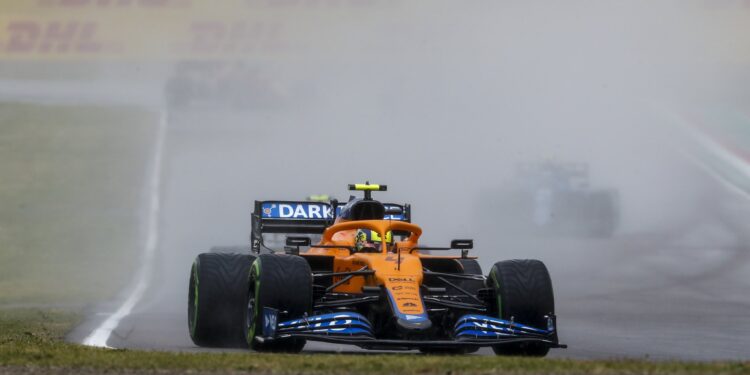 The Briton recovered from the disappointment in qualifying on Saturday after having a second row start denied by the stewards – Norris was adjudged to have exceeded track limits on his fastest run and his time deleted.

The 21-year-old was down to ninth in the race after a poor start but managed to put the McLaren’s straight-line speed to good use – even saying his MCL35M is a “cool car to drive” over the radio after the race.

“I’m happy, I think a nice recovery after yesterday,” beamed Norris. “I didn’t start so well, it was a tough start but I came back through – I had good pace.”

McLaren opted to put Norris and teammate Daniel Ricciardo on the soft compound tyres after the red flag period and the British driver initially put race leader Max Verstappen in the Red Bull under pressure. But, as his soft tyres started to lose performance, he was put under increasing pressure from the Ferrari’s behind.

Eventually, a recovering Lewis Hamilton managed to claw his way back through the field and up to third place. He eventually passed the McLaren driver for second with a few laps left – however Norris was pleased that he was able to fight at the front “on merit”

“I tried hanging on to second but Lewis was a bit too quick for me today. It’s nice to be fighting these guys, to be there on merit and pace and I hope we can have some more in the future.

“We opted to go on the softs for the restart. I had good pace in the first 10/15 laps [after the restart] but I knew I was going to struggle a lot towards the end – especially with Lewis [Hamilton] behind me.

“It was not going to be an easy one. But I tried, I held on for two or three laps but in the end I just couldn’t hang on. But I’m happy with third.”

Norris was voted driver of the day after his performance and the young Briton seemed surprised with the accolade.

“They did?” Said Norris. “I didn’t think I had any fans but thank you very much!”