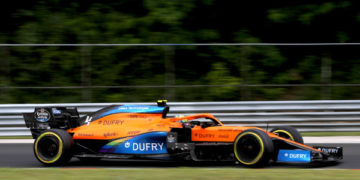 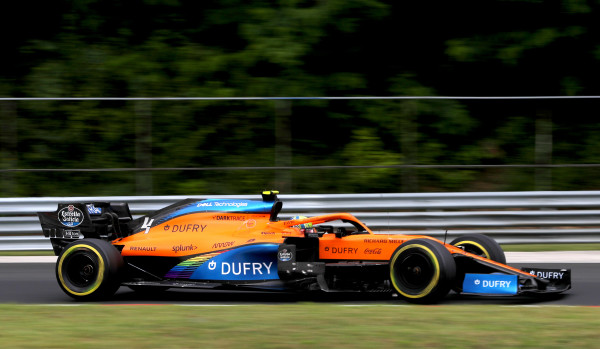 The Briton suffered wheelspin on the damp start and, as a result, he dropped down to 13th and struggled to make progress following a pitstop for dry tyres.

“Tough result,” said Norris after the race. “I wouldn’t say tough race. The hardest part was my start – I had a good launch but then in the second phase I just had so much wheelspin and it all went wrong.

“That was a mistake I made. I haven’t done that many starts in the wet and I’ve never had a great one. I’ve been preparing for it, but I just couldn’t quite get it right again.”

The 20-year-old finished on the podium at the opening round of the championship in Austria, but struggled in traffic at a circuit where overtaking opportunities can be few and far between.

“The rest of the race was just trying to recover from [the bad start],” said the McLaren driver. “It’s such a difficult track to overtake on, I couldn’t really do too much else.

“I think the pace was good, and the car was pretty good to drive. I just had a difficult start on probably one of the most important tracks to get away quickly, so on to the next one.” continued Norris.

“It’s my first proper big mistake of the season. I need to work on it and come back stronger. A big thanks goes to everyone in the team, who’ve worked hard to put both Carlos and I in the best possible positions over these opening three races.

“I’m looking forward to putting this race behind me at my home track over the next two grands prix.”

McLaren have had a positive start to the season sitting in third in the Constructors’ standings. Team Principal Andreas Seidl praised his teams’ efforts after a difficult Sunday in Hungary.

“First of all, a big thank you to the entire race team for completing our first triple-header of 2020,” said Seidl. “We really pulled through as a team and we’re travelling back to the UK with 40 points in the constructors’ World Championship.

“Unfortunately, after two very good weekends, our race here in Hungary was compromised from the start. Lando Norris had an issue off the line that lost him a lot of positions, but he kept fighting and made his way back up to P13.

“Both drivers fought excellently, giving it their all right to the end and not giving up.”