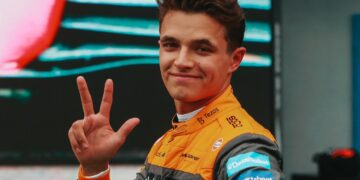 Norris on P3: nice to see the hard work paying off

Norris on P3: nice to see the hard work paying off 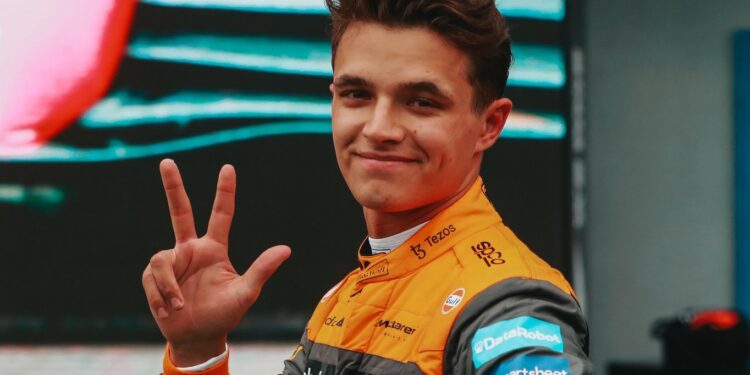 Emilia Romagna Grand Prix – Lando Norris was looking at a strong fourth place finish for McLaren before a late error from Leclerc gifted him a podium spot.

McLaren have had a very up-and-down start to the season, being quick in the first pre-season test, but then struggling massively in the second test and the opening round of the year. Since then, Norris has been getting better each race, taking a P7, then a P5 and now a P3, McLaren fans around the world will be hoping that that pattern continues into Miami.

Norris had qualified P3 on Friday but lost out to Sergio Perez and Carlos Sainz in the Sprint and started the Grand Prix in P5. With neither Ferrari getting off the grid too well, and a good start for the McLaren driver, he was back into P3 before they had reached the first corner.

“An amazing start to be ahead of the Ferraris,” Norris said, “to stay out of the chaos which happened behind, just I guess a lonely but a great race. Just managing the gap to George, looking after the tyres for the whole stint.

“Everything just went well all weekend to be honest, not just the race today, but qualifying P3 already was a pretty good achievement for us. So, great weekend. Nice to see the improvements we’ve been bringing and to reward everyone with a podium is even better.”

We think Lando was pleased with his podium! 😍#ImolaGP #F1 pic.twitter.com/3QLKRvzCgR

While Norris lost P3 back to Charles Leclerc a few laps into the race, he was the one to benefit most from the Ferrari driver pushing too hard at the end and hitting the wall.

“Fourth was still going to be an amazing position and amazing result for us, great points better than we were expecting coming into the race and into the weekend for sure. The race was still tough…I still had to look after my tyres, it was a long stint on the medium. Plus given I struggled so much yesterday to do 20 on the soft, the 40 whatever we did today on a medium, I didn’t think was going to be possible.”

In the press conference Norris said that after their awful start to the year, he hadn’t been expecting to be anywhere near the podium all season. Despite how much work McLaren have put in since then, he said it’s hard to even imagine getting onto the podium given the pace of the top two teams.

“Surprised I guess to be here,” he said, “but feels amazing. From where we were, what, three weeks ago, four weeks ago, a month, in Bahrain to be on a podium, I genuinely didn’t think we would be on the podium all year after Bahrain. So, it’s quite a shock.

“Maybe not surprising after the kind of progress we’ve made over the last month but definitely not a podium. With how much quicker the Red Bulls and the Ferraris are, it’s hard to ever imagine yourself on the podium.”

The young Brit said that the third place was mainly down to the team and all the choices they’d made throughout the weekend, and he hopes their slow and steady improvements will continue.

“I don’t think today, and this weekend, it was necessarily all about the car,” Norris told Sky F1. “I think a lot of it was just the teamwork, the pitstop was amazing, and just how we executed the weekend, which was what gave us this result.

“With the starts, the strategy, the qualifying, judging the tyres and all of this stuff, the smaller things that you probably don’t get to see is what got us to the podium today. So it’s just lovely to see but the improvements we’ve been bringing have definitely been moving us forward, slowly forward and we really need to try to keep that up.”